Put a Bird on It (Boulder-Style): Boulder’s Backyard Birds 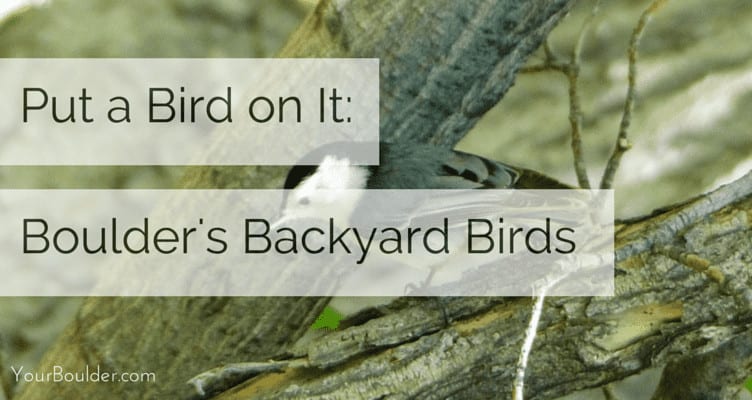 Ever since Portlandia told us to “Put a Bird On It,” birds have been trending strongly in pop culture. And in nature, birds have been doing quite well since the Jurassic Period.

Birds live particularly well right here in Boulder, where the wide-open plains meet the forested canyons and mountains. Our landscape and climate supports a wide diversity of plants and invertebrates, which in turn makes the area very hospitable for many species of bird. They thrive in our open space, and many are quite at home right in town. We see them daily in our backyards, neighborhoods, and parks.

This being the case, if your bird identification skills are limited to “looks pretty” or “has brown feathers,” then you might want to kick it up a notch. Most of us live here because we love nature, so let’s get to know Boulder’s most common avian residents a little bit better. You’ll impress your friends when you’re drinking beer on the back patio and that cool black and white bird with the flash of blue swoops overhead… and you’ll be able to tell everyone exactly what it is. (Spoiler alert: It’s a Magpie.)

Scientists estimate there are as many as 1.4 billion individual House Finches in North America. Originally native to the western United States and Mexico, they were brought to New York City in the 1940’s and are now prolific throughout most of the country. Male House Finches are easy to identify. Simply put, they look like sparrows that have been dipped upside-down in cranberry juice. Female House Finches lack the rosy red accents which makes them harder to identify, but it helps that their male counterparts often accompany them. House finches are likely to be spotted anywhere there is easy food to be had – bird feeders and restaurant patios are some of their favorite hangouts. Look for them at Pearl Street Mall.

Chickadees are often heard before they’re seen. Year-round they elicit their trademark “chickadee-dee-dee.” In the springtime, their mating song is “fee-bee, fee-bee!” (Some bird enthusiasts have changed that to “hey sweetie,” which suits the chickadee’s amorous intentions.) Black-capped and Mountain Chickadees are easy to distinguish once you notice the white stripe above the Mountain Chickadee’s eye. These acrobatic birds have a bouncy flight and are often found if woodsy areas and shrubs. Their diet consists of seeds and insects. Look for them in parks and backyards throughout Boulder.

The Downy Woodpecker is the smallest and cutest member of the woodpecker family. (Note: Cuteness is subjective and the scientific community does not support this statement.) Males have a small patch of red on the back of the head. They can be hard to spot, as they’re frequently 10-15 feet high on tree branches and trunks poking around for insects. You’ll find them in parks and neighborhoods with denser woods. When you hear a “peck, peck, peck,” look up.

The Northern Flicker makes quite a visual impression. Found throughout North America, its markings differ by region. Here in Boulder, you’ll see red on the cheeks and on the tail. Their conspicuous white rump patch is key to identifying them. It’s often seen as a flash of white when they fly away from people. Flickers are part of the woodpecker family, but, unlike the Downy, Flickers are more often found on the ground than in trees. You’ll see them eating ants and beetles in yards and parks and even on sidewalks.

Steller’s Jays are stunningly beautiful, intelligent residents of evergreen forests at higher elevations. To identify them, think “Catherine Zeta Jones on Oscar Night.” The head is jet black and the body begins with a deep royal blue that turns lighter and almost sparkling near the tail feathers. Their unmistakable squawk often precedes their arrival and marks their departure.  Like other jays, Steller’s Jays are very opportunistic and adept at finding food both in the wild and in town. Look for them in Boulder’s western neighborhoods and in the foothills.

Black-billed Magpies are a common sight in both open space and around town. Their black and white body is highlighted by stunning swaths of blue on the wings and tail. The tail is exceptionally long. Black-billed magpies are noisy birds and will often settle into an area in large groups and make quite a racket. They eat a varied diet and search out easy food sources. Look for them throughout Boulder, especially in the alleys on trash day.

As you can see, Boulder is truly for the birds! (I apologize – it’s an unwritten rule among nature writers that every bird article must feature this pun.) All of the above birds live year-round in our fair city. Now you know a little more about them, and hopefully your days will be a little bit brighter for it. Next time you’re sitting at the traffic light on Canyon and Broadway, or waiting interminably for a table at Snooze, pass the time by checking out those House Finches fighting over a piece of energy bar on the sidewalk. And now you’ll know that they’re House Finches!

Sign up for our FREE weekly email with Boulder’s best events, concerts, happy hour deals, comedy shows and more. Delivered to your inbox every Friday!
PrevPreviousBoulder-Centric Nonprofits for Colorado Gives Day Giving
NextBooze: There’s Now an App for That in BoulderNext