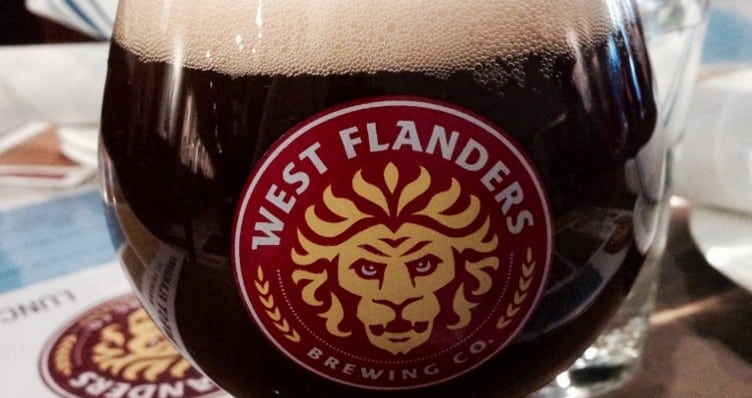 Based on 2012 numbers, there are over 150 craft breweries in Colorado (a number that I’m sure is fast approaching 200 by now); there are also over 100 restaurants in downtown Boulder alone. Based on those numbers, it takes a lot for a brewery and a Boulder restaurant to stand out from the crowd. West Flanders does so with style.

Located in the space that used to be BJ’s a few years back, West Flanders is a happy addition to Boulder’s Pearl Street Mall as well as the Boulder beer scene and a place I try to stop into any time I’m downtown and have an extra half an hour (or more) to spare.

Of course, it’s not difficult to get a microbrewed beer in virtually any bar or restaurant on Pearl Street, but I prefer going to the source whenever possible. It’s also a definite bonus that their food is delicious and they offer beer pairings with each menu item, so you can’t go wrong with a bad pairing. Plus, West Flanders has a fantastic happy hour. For $3, you can get a pint of freshly brewed craft beer! I’ve been to a few happy hours around that area where $3 will normally only get you one of the big box breweries (I’ve even seen places that charge that much for a PBR, which is just horrendous). Based on their happy hour alone, I think this is the perfect place to start your evening or end your day. I’m thinking the Boulder beer scene just got better.

What I didn’t know is that this isn’t the first bar or restaurant for West Flander’s owners and brewmaster. The Heinritz brothers previously owned Red Fish, as well as Boulder’s historic Hill staple, The Sink. They brought brewmaster Brian Lutz (from Red Fish) on to develop the beer list of West Flanders and Barry Wolfman to be partner and GM. Then they hired Anthony Hessel to be the executive chef, creative a perfect storm for great beer and fantastic food.

Beer: St. Marks Dubbel and Trippel Lutz (Note: I can’t drink IPAs, so I haven’t tried Third Kingdom, Black Immaculate or Canniption) are great if you plan on kicking back and staying to try a few beers. If you’re just stopping in for one beer, the Lionheart Stout is great as well.

Food: If you’re popping in for Happy Hour, I love their butcher block. It’s perfect for one or two people to nibble on while enjoying their beer. If you’re in the mood for something a little more substantial, I cannot recommend the fig and cherry flatbread enough.

Overall, I’m very happy that West Flanders found a home in the Boulder restaurant scene on Pearl Street. It’s a great place with reasonable prices in an area that be a bit pricey at times. And for those who love the Boulder beer landscape, raise a glass to West Flanders — especially around happy hour!