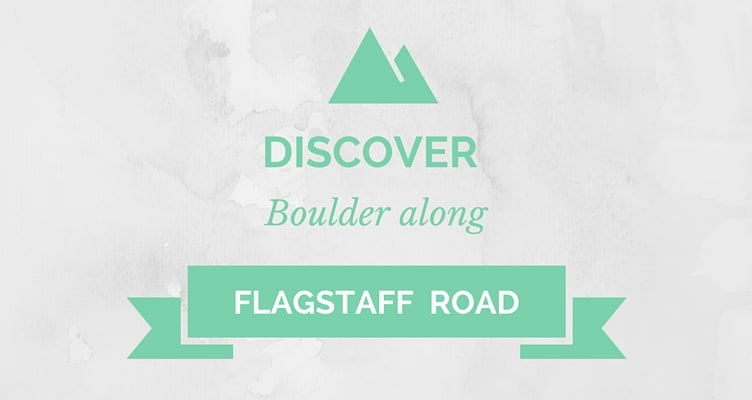 It took a few months of living in Boulder for me to realize I’d never explored what was west of Chautauqua on Baseline Road. One morning after an early Chautauqua hike I headed west on Baseline instead of east, and I was treated to a whole new outlook on Boulder, both visually and historically, as I wound my way up Flagstaff Road.

Heading westward on Flagstaff Road to the summit of Flagstaff Mountain is a channel into countless opportunities for Boulderites to play, relax, and learn. Not only does the road lead to bountiful hiking trails and picnic spots with spectacular Boulder views, but it also leads to sites linked to Boulder’s history and the history of the United States.

For anyone who has taken the winding drive to Flagstaff’s summit and seen hikers crossing, bikers braving the steep, twisting grade, wedding parties headed towards the summit’s amphitheater, or curious Boulderites out on a scenic drive, you have found a portal into a wealth of Boulder’s quintessential activities and possibilities.

The foothill that is Flagstaff Mountain reaches 6,983 feet in elevation. According to Mary Reilly-McNellan’s History of Boulder Mountain Parks, Boulder citizens originally voted to purchase the eastern slope of the mountain in 1898, and additional portions of the mountain continued to be acquired for many years thereafter, eventually becoming City of Boulder Open Space & Mountain Parks (OSMP) property.

There are multiple stories explaining the name of the mountain, from a man losing his shirt to a fellow traveler after an altercation, with the victor tying the man’s shirt high in a pine tree so that it was visible from the Boulder valley below, to young men tying a flag to a tree at the top of the hill as proof to someone they’d made a bet to that they could summit the hill and be back to Boulder by mid-day. The mountain has played host to a number of attractions, spectacles, and events throughout the years, from makeshift ski slopes in the mid 1900s to forest fires to lighted symbols, including a peace sign in 1969, an Easter cross for over twenty years, and of course the ever popular Flagstaff Star lit each holiday season.

If you get dizzy today driving up Flagstaff Road to the summit of Flagstaff Mountain, it might get your head spinning to learn about the first iteration of Flagstaff Road over 100 years ago. An extension of Baseline Road, in 1906, Flagstaff Road going up the eastern slope of Flagstaff Mountain was just ten feet wide. According to Reilly-McNellan, horse drawn carriages and primitive cars would drive up the road as early as 1907 for scenic tours although, as you can imagine, the trek was a stressful and downright scary one for passengers. Boulderites continued to campaign throughout the 1900s for improvements to be made to the road, which was described as perilous and dangerous, which have ultimately given Boulderites the safe, albeit twisty and sometimes “white knuckle” experience, Flagstaff Road of today.

One of the biggest pushes for improvements to Flagstaff Road and the many attractions stemming off from it came in the 1930s. The Civilian Conservation Corps (CCC) was a program created as a result of Franklin Deleanor Roosevelt’s New Deal aimed at lifting the U.S. out of the Great Depression by creating meaningful jobs and stable income for citizens while also improving and maintaining the nation’s infrastructure, specifically through projects such as reforesting and improving national parks. A CCC unit was stationed in Boulder in the 1930s and made huge improvements to Flagstaff Road as well as Chapman Drive on the western slope of Flagstaff Mountain.

Another Boulder staple at the summit of Flagstaff Mountain that Boulderites can thank the CCC for is the Sunrise Amphitheater. According to the City of Boulder website, the CCC built this structure between 1933 and 1934, which features a large circular stone area that looks out over Boulder and the plains stretching eastward. The amphitheater has historically been an important and meaningful gathering place for the Boulder community during events such as Easter Sunday sunrise services. The amphitheater today is most well known as a popular wedding venue that seats approximately 150 people, but it is also a relaxing and spectacular location to drive to simply to picnic, enjoy a travel mug of coffee, watch a sunrise, and take in the breathtaking views.

There are a number of educational and historical attractions stemming from Flagstaff Road sure to peak the interest of any Boulderite, new or native, and any visitor. Here is a small sampling of what you can find:

There are many trailheads that can be accessed off Flagstaff Road, such as the Flagstaff Trailhead and the Realization Point Trailhead, leading to a wealth of interconnected trails and popular hiking routes. There are also pre-planned historical hikes, such as the Cultural Resources Flagstaff Mountain Hike, that you can follow to be sure you check all the historical sites you want to see off your list.

Open from May through September, the Flagstaff Nature Center is at Flagstaff Mountain’s summit and houses displays and exhibits related to OSMP’s history and the wildlife and plants you can find in the area. Originally opened in the 1980s and expanded upon in the 1990s, this is a great place to bring the kids to learn about their local environment.

Flagstaff summit facilities do close seasonally from October 31st through April 30th each year due in part to the unpredictability of our weather here in Boulder. Flagstaff Summit Road likewise closes for vehicles from October 31st until May 1st (pedestrian access is still available).

For more information about these venues, sites, renting facilities, and to check on closure dates and accessibility, visit the City of Boulder website.

Sign up for our FREE weekly email with Boulder’s best events, concerts, happy hour deals, comedy shows and more. Delivered to your inbox every Friday!
PrevPreviousDining Out on Thanksgiving in Boulder
NextA Boulder Holiday-tastic Gift: The Winter WarmerNext