The City of Boulder’s Open Space and Mountain Parks: A History 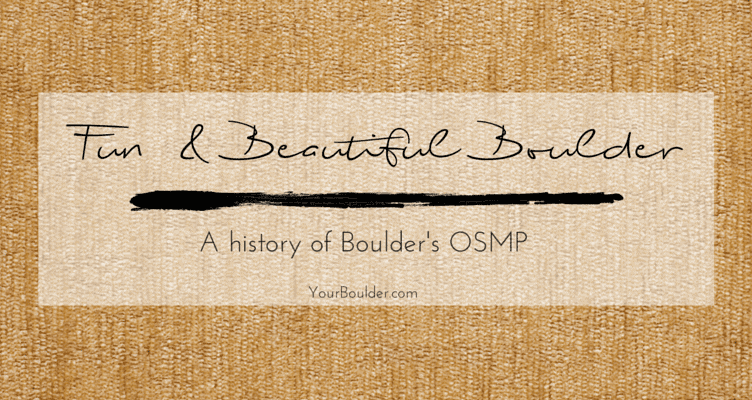 Both residents of and visitors to Boulder alike have instilled images of the city in their minds, whether that be a freezeframe of the Flatirons, Chautauqua, or perhaps Flagstaff Mountain. Boulder’s citizens, however, are not mere spectators to the beauty of the city and its surrounding natural areas.

Instead, Boulderites for generations have taken proactive steps to protect it. Through a long history of conservation efforts and ensuring the preservation of the natural areas surrounding the city, as well as through the inception of what is now the City of Boulder Open Space and Mountain Parks Department (OSMP), Boulderites have been enjoying, preserving, and protecting, Boulder and all its beautiful features for over a century.

Boulder citizens first began taking ownership, quite literally, of Boulder’s natural habitat and landscape in the nineteenth century. According to Mary Reilly-McNellan’s History of Boulder Mountain Parks, Boulder citizens first voted in 1898 to purchase portions of Huggins Ranch and Batchelder Ranch (what are now areas of Flagstaff Mountain and Chautauqua, respectively) in an effort to ensure that the land was preserved and protected. In the coming decades in dealings with private citizens, the state, and the Congress of the United States, Boulder citizens continued acquiring more and more land both in these areas and around the city, taking steps to prevent the construction of potential eyesore projects and properties that would infringe on the natural landscape and skyline and developing park areas to encourage responsible and sustainable use and preservation of the land.

“The OSMP is the culmination of work for generations to conserve Boulder’s special legacy,” says Phillip Yates, spokesman for the City of Boulder Open Space and Mountain Parks Department. “The City of Boulder has an incredible legacy of citizen-driven stewardship.”

With population booms in the mid-twentieth century, Boulderites continued to focus on preserving the city’s mountain backdrop and habitat, making history in 1967 by becoming the first city in the United States to self-impose a tax on themselves for the purpose of continued purchasing and maintaining of open space around their city. It was in 2001 that the City of Boulder Mountain Parks Division merged with the Open Space/Real Estate Department to form what we now know as the OSMP, created under the precedent of the real control of Boulder’s citizens over the city’s cherished natural environment.

Today the OSMP is a treasure trove of resources aiming to educate the public about Boulder’s open spaces and to instill how special and unique they are. According to the OSMP website, Boulder’s OSMP encompass over 45,000 acres of land and over 147 miles of trails throughout Boulder, land that is all protected by the very people who call Boulder home. The OSMP protects the area’s extremely diverse ecosystem and allows Boulderites and visitors to be in the know with information such as trail maps, real time trail conditions and closures, and much more. With the goal of encouraging responsible enjoyment of Boulder’s natural spaces, the OSMP aims to educate visitors and citizens so that, even as visitor numbers in the area continue to rise, the impact on Boulder’s natural flora and fauna does not change.

The OSMP is inextricably tied to Boulder’s identity as a city.

“Open Space is a key part of what makes Boulder Boulder,” says Yates.

Not only are there countless historical structures and areas protected by the OSMP (such as the many historic features along Flagstaff Road), which are literal representations of Boulder’s past, but the department simultaneously works to protect that land’s future. For example, the OSMP’s Junior Ranger Program, founded in 1965, has, according to Yates, served as a vital experience for over 5,000 area teenagers, who have both gained valuable work experience and learned about the importance of environmental stewardship and responsibility.

The work of the OSMP is all-encompassing, reaching both backwards and forwards on Boulder’s historical timeline to ensure that the same opportunities that we have to enjoy Boulder’s habitat today are maintained to be just as diverse, lively, and beautiful, for generations to come.

Boulder native Yates describes his feeling of being most at home in Boulder’s open spaces, and the city is known for its citizens reveling in jumping right into the city’s natural habitats all year round, whether by bike, by foot, or with a four-legged companion at their side. Just as when Boulderites first began tangibly watching over their city’s surrounding natural area in the nineteenth century, volunteers and Boulder citizens are a huge driving factor in what keeps the OSMP operational and successful today. To learn more about how to volunteer with the OSMP, check out the volunteering page of their website. For other ways to get involved and to learn more about everything that the OSMP does for Boulder and its inhabitants and just how unique our area is, peruse their website, sign up for their newsletter, or follow them on Facebook, Twitter, and Instagram for feeds filled with mountain views, hiking sights, and more.

Boulder citizens have historically set the precedent for responsibly maintaining the area’s gorgeous landscape, and the area is unique because of just how connected the local population is to the land around them. Boulder’s citizens love you Boulder, and we always will!