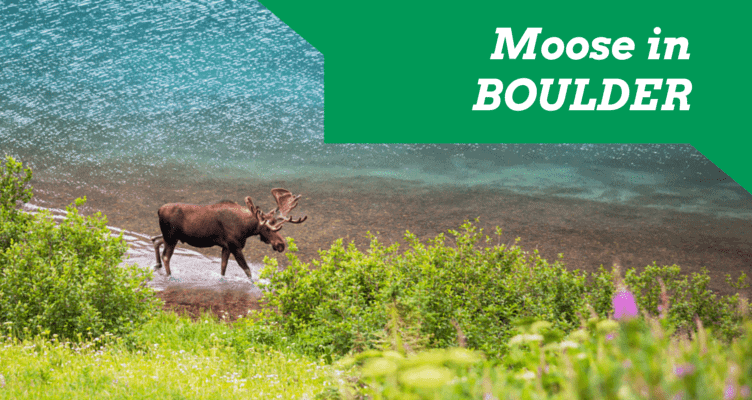 Imagine you’re walking out of a bar on Pearl Street Mall after dinner or a few drinks with friends and out of the corner of your eye you spot a moose.

That’s not the beginning of a joke or a tagline, and it’s actually not so far fetched here in Boulder. Many Boulderites would have seen or heard the news about the moose that turned up on Pearl Street Mall late on a June evening this year, wandering (and window shopping?) at the mall for an extended amount of time before being driven back into the Boulder foothills.

Moose sightings in Boulder County have been on the uptick in recent years. When I hear “moose,” I think of a lovably bumbling, Bullwinkle-style creature, but the truth is that moose can be just as potentially harmful as any other animal you might encounter in the wild of the Boulder County area. Moose are a large part of Boulder’s extended environment and, just as it is with any other animal that we share our local area with, it’s vital to understand the history, tendencies, and behaviors of these creatures in order to maintain a respectful, sustainable relationship with them.

According to Colorado Parks & Wildlife, moose are the largest members of the deer family and are most common in the northernmost regions of North America, notably Alaska and Canada, as well as in Asia and Europe. Moose prefer living in areas near lakes and rivers and, while they may appear cute and cartoonish at first glance, they can grow to be massive and surprisingly fast, powerful animals.

The first records of moose in Colorado note that they likely wandered into the state from Wyoming in the nineteenth century. Today, according to the Daily Camera, moose are the biggest wild animals that you will find in the state. In the late 1970s, years of conversations about the possibility of introducing a more stable moose population into Colorado, a state with plenty of habitat nicely suited to their needs, led to the first transplanting of moose into various areas throughout the state, including in Boulder. The moose population boomed and has reached over two thousand animals in the state in recent years.

This boom in the moose population has proved wonderful for nature enthusiasts and wildlife junkies alike in the Boulder area and the state of Colorado in general. With this increase in population, though, also comes an increase in encounters between moose and humans.

Typically docile and gentle, moose rarely proactively cause problems. From the moose that wandered into Pearl Street Mall this June to one that found its way into a Nederland skate park in 2012, sometimes moose simply find their way into an uncharted place while they look for new territory. There are various factors, though, that can cause a moose to become aggressive and even potentially violent towards a human.

Historically, there have been various moose attacks and serious moose/human encounters throughout Colorado, especially in the Grand Lake Area. June of 2015 also saw a news story about a moose that charged at a family that was camping near Nederland, a situation that thankfully ended, according to the Daily Camera, with no serious injuries.

Since moose do not have many natural predators in the wild, they are instinctively curious creatures. Like so many other wild animals, they are also extremely protective of their young. Just as you would avoid getting between a mother bear and her cub, the same holds true for a mother moose and her calf. Early summer, which is typically calving season for moose, and moose mating season in the fall are the two times of year when you should be particularly wary of coming into contact with a moose, as they are more prone to aggression during these time periods.

Likewise, moose can become extremely spooked by dogs, which they might mistake for a wolf or might simply find threatening if they are too aggressive towards them. If you see a moose in the wild, knowing their behaviors when they are spooked and about to attack is very important, as is being conscious of your dog and how the moose is reacting to your walking or hiking companion.

Education and respect for these wild animals is key to living peacefully alongside them in the Boulder County area. Organizations such as Colorado Parks & Wildlife offer plenty of resources so that you can learn about moose, find out tips on how to safely view moose in the wild, and what to do if you ever find yourself in too close proximity to one, always aiming to further our education, promote safety, and encourage an informed respect of this wildlife.