A Boulder Farewell to a Legend: Remembering Robin Williams 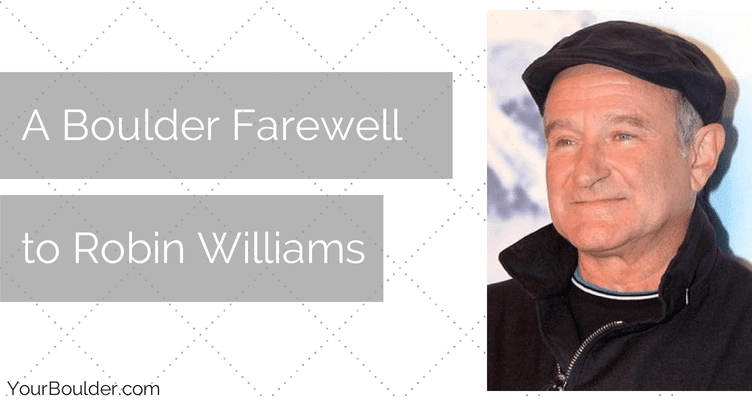 When I moved to Boulder back in 2012 (just up from Denver), I was taking a stroll downtown one day with friends down Pine Street. One of my friends started going, “Nanu nanu!” I was like, WTF? He said, “It’s the Mork and Mindy house!”

I turned and looked. In a flash, hours and hours spent on the living room floor in front of the television came flashing back. Holy crap — that IS the Mork and Mindy house.

And then there was yesterday. I’d left my phone at home in a rare instance of brain fart and was looking at a colleague’s phone as she scrolled through Facebook in the early evening hours. She gasped.

My entire childhood just got sucker punched. With the wind knocked out of me, I had no words but all the words at the same time — they were just lodged my the throat, blockaded by the knowledge that anything I could possibly say would be absolutely nothing at all.

My brother and I used to run around the house yelling, “Phenomenal cosmic powers — itty bitty living space!” And once you heard Williams’ voice coming from a big blue genie, there was no other voice that could power that fella. Williams left his mark on each character he created, a man who took on story with a level of bravery and honesty that so few performers can. In the process — love him or hate him — we all became better for it. There was just something about watching Robin Williams in action that dared me to be a bit braver in my life. Follow my musts. Go “see about a girl.” Discover the glory that comes from seizing the day and making my life extraordinary.

We’re lucky, and this I believe without reservation. We’re lucky to have been a part of the few generations of humanity that got the opportunity to see his brilliance spark, burn brighter, and evolve. We’re also quite lucky for the legacy of laugher he’s left behind. Yet I can’t help this morning but to think that the spark of madness that inspired him to invest so fully in the weird and wonderful was the same spark that brought his life to an untimely end.

So today — maybe give an ounce more weight to the reality that is depression. The reality of the demon that’s capable of destroying a life from the inside out, yet unable to be seen on any x-ray or scan. I can’t stand it when I hear people say that someone who took his or her own life was being selfish, an insensitive act that hurts those who dared love the person. Instead, it’s much more the reality that we can’t begin to know the demon that is depression and how bad it must have been for them to decide to exit through the swinging door, never to return.

Yesterday, our world lost an amazing talent. His family lost a father and a husband. Yet one thing we can do is refuse to accept the state of mental health care as it stands today and the stigma attached to illnesses of the mind — which should be given as much credence and weight as illnesses of the greater body.

So, thank you, Robin Williams. Thank you for stopping by Boulder last year to bring Mork back home one more time. For sharing your spark of madness (as you always said, we each only get one and what a waste it would be to not use it). And for showing us what honesty looks like when the filter is turned completely off.

Traffic at the Mork and Mindy house is growing — check out the news here and maybe stop by Pine Street on your way to and fro today. I’m sure Mork from Ork would have cherished that.

Sign up for our FREE weekly email with Boulder’s best events, concerts, happy hour deals, comedy shows and more. Delivered to your inbox every Friday!
PrevPreviousVaccinations for Schoolchildren in Boulder County: Facts, Thoughts, and Statistics
NextChickens and Boulder and What? Oh, My.Next