History of the Flagstaff Star: The Light That Guides Boulder Through The Holiday Season 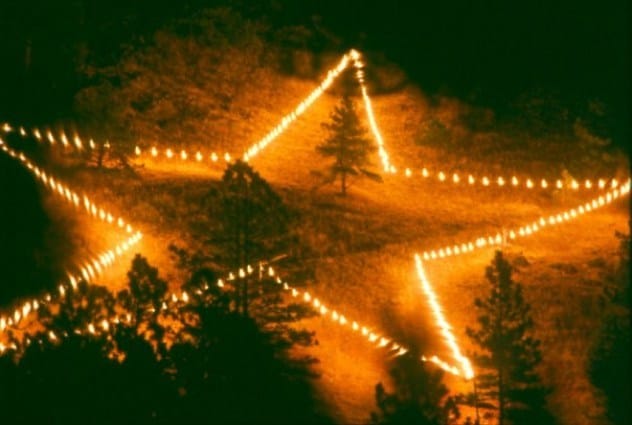 In Boulder, the holiday season doesn’t officially begin until the 365 bulbs that make up the Flagstaff Star are officially lit. It’s the symbol that guides locals through Thanksgiving, and Christmas, and into the new year. For more than 75 years, the lights of the star have been a steady beacon and an important part of Boulder’s festive holiday decorations—illuminating Boulder’s western facade with holiday cheer. Even though the lighting of the star on Veteran’s Day is a beloved local tradition, that hasn’t shielded the Flagstaff Star from acts of vandalism, political debates, and community controversy.

In 1947, the Flagstaff Star was born, innocently enough, as a Christmas decoration for the people of the city of Boulder to enjoy during the holiday season. 1947 was a good year, but the following season, the Boulder Chamber of Commerce—the star’s keeper—chose to convert the star into an Easter Cross. For the next two decades, the formation of the lights on the side of Flagstaff Mountain alternated between the Christmas Star and the Easter Cross; always making an annual appearance in either form in time for the holidays.

The harmless mischief of the ‘50s turned political in the ‘60s when suspected Communists repeatedly covered the bulbs of the star in the red paint—recreating one the most widely recognized symbols of Communism on a serene and peaceful Boulder mountainside.

In 1969, the lights of the star were constructed into a giant peace sign—a break from the traditional star and cross formations. That same year, a group of Boulder residents filed a complaint with the Boulder Human Relations Commission about the star/cross, stating that both formations were representations of Christian symbols which was a violation of church and state since the lights shone on city property. The debate occurred again the following year, but through it all, the lights of the star remained on.

By the 1980s, the star was once again the target of intentional vandalism. In recognition of American hostages being held in Iran, the star was left up into the month of February. The additional use of electricity needed to power its lights upset local environmentalists who cut down the wires, removed the bulbs, and declared the star a terrible man-made object that disrupted local wildlife and wasted energy.

“The Flagstaff Star is a treasured community tradition,”said John Tayer, President and CEO of the Boulder Chamber of Commerce. “We’re very honored to be the caretaker of that tradition.”

Through recent Chamber efforts, the star has undergone an environmentally-friendly makeover, replacing all 365 bulbs with long-lasting, low energy, LED lightbulbs—and utilizing wind-power to generate the electricity needed to keep the lights of the star shining . The Chamber also features one local artist’s work each year on a Flagstaff Star greeting card which is sold throughout the community to raise funds to support the continued maintenance of the star. The organization has also teamed up with Boulder-based Bookcliff Vineyards to create a Boulder Star Wine, with funds also supporting the star’s upkeep—helping to keep this beloved holiday tradition shining over the city of Boulder for many more decades to come.

Visit the Boulder Chamber for more information on fundraising for the Flagstaff Star.