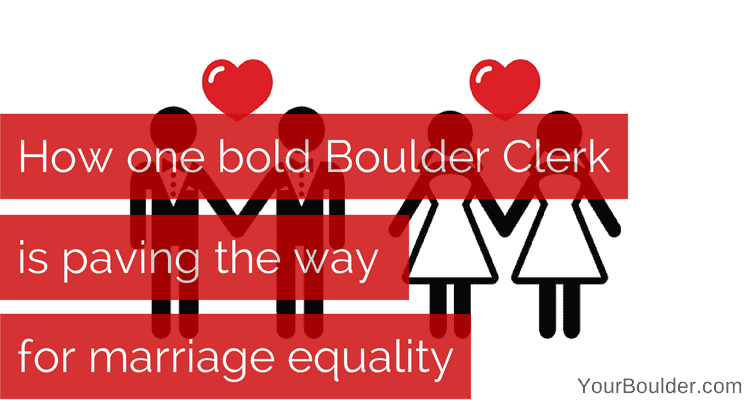 I’m calling it like I see it: we have legalized weed, but we haven’t expanded marriage to all who want such a union. Nice work, Colorado. 19 states plus Washington, D.C. have legalized gay marriage, yet here Boulder is, trapped in a heated (and quite national) debate. I find this ironic as we can get as high as we want to support public schools, but we draw the line at gay marriage.

Hillary Hall, a Boulder County Clerk and Recorder, found herself in the national spolight in weeks past for continuing to issue same-sex marriage licenses. A Denver County Clerk quickly followed suit. Boulder residents have far and wide just smiled and shaken heads (SMH in internet parlance), yet Hall has raised State Attorney General John Suthers’ hackles. He’s now appealing to the State Supreme Court to get clerks in both Boulder and Denver counties to stop issuing same-sex marriage licenses. Hey, folks — it’s your tax dollars at work here. A ruling out of Adams County last week found Utah’s gay marriage ban unconstitutional but Suthers is fighting it every step of the way. This all comes on the heels of Utah’s gay marriage ban being struck down (whose state officials plan to appeal directly to the Supreme Court). As a note, the ruling in the Utah case applies to Colorado law as it occured in the 10th Circuit Court of Appeals.

This all saddens me for many reasons.

First, equality. That love takes precedent and who are we to say that the marriage of two individuals of the same sex is any less valid than the marriage of two of the opposite sex for the puposes of either love or committing insurance fraud — both valid reasons for heterosexuals to marry under current law.

Secondly, hypocrisy. We’ll be the wake-and-bake tourism destination of the world (aside from severely understocked Washington State and Amsterdam) and tax the daylights out of recreational weed in the name of education, yet our state can still find some ethical dilemma with any two freakin’ people getting married who want to get married. And yes, I’m talking to all of you folks who are “staying together for the kids” or decide to pursue extracurricular activities while married and hope to hide such from your unwitting spouse.

But then again, what do I care if you’re staying together for the kids, committing insurance fraud, or screwing around on your (apparently) not-so-significant other? You can get married. You can get married high. You can hork a plate of weed brownies and stroll into the courthouse and join the legions of heterosexuals worldwide who have full state and federal legal protections granted by such a union. Colorado still only affords same-sex couples civil union. And it’s not the same.

Yet here we are, a progressive state like Colorado, with only a few county clerks in Denver and Boulder (and also Pueblo) paving the road toward marriage equality.

It’s sad that our state tax dollars are being spent on such frivolty. And while the Attorney general might say that the urging to stop issuing licenses is due to “muddy waters” and the need for uniformity, I’ll still say that it’s unnecessary. The Utah precendent stands from the 10th Circuit. 19 states ahead of us along with D.C. stand. Do we want to remain the state representing the most ridiculous of all ironies — legal weed but illegal gay marriage — or do we want to become the 20th state to welcome all to the union of marriage? We are Colorado, for better or for worse. And I, for one, thank Hillary Hall for being part of the better these days.

Sign up for our FREE weekly email with Boulder’s best events, concerts, happy hour deals, comedy shows and more. Delivered to your inbox every Friday!
PrevPreviousThe Mudslingers: A Boulder Kickstarter Aims to Tell Flood Story
NextAdorable Boulder Raccoons Need Your Help. Can We Count on You?Next