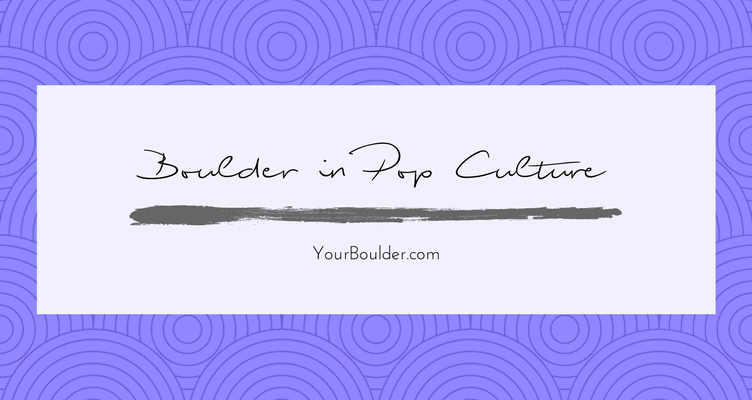 Whenever I hear Boulder mentioned in a movie, sitcom, or song on the radio, I feel a little twinge of pride in my town getting a shout out. Sometimes it’s admittedly more than just a twinge and has, in the past, involved a loud exclamation of, “Boulder! I live there! I LIVE there!”

Boulder’s colorful reputation (to say the least) makes it a no-brainer as a setting for a movie or novel or, admittedly, as playful fodder for satire. Boulder’s pop culture presence spans across mediums and genres and, whether it’s being portrayed as a hippie haven, a mountainous escape, or a quintessential college town, we like to think these little cameos are always out of love and appreciation for our unique city.

On the Silver Screen

With a bounty of picturesque locations, from Pearl Street Mall to the Flatirons, it’s no surprise that Boulder has made cameos in a variety of films.

In 1973, Woody Allen’s film Sleeper, a blend of science fiction and comedy adventure, utilized well-known locations in Boulder such as the National Center for Atmospheric Research (NCAR) and the iconic Mesa Laboratory for exterior shots. The premise of the film has a distinctly quirky, Boulder-y feel as well, with Allen’s main character as the owner of a health food store called the Happy Carrot who is cryogenically frozen and defrosted 200 years later to find the world quite different than how he left it.

Boulder also makes an appearance in The Big Short, Adam McKay’s 2015 film based on the 2005 book by Michael Lewis about the housing bubble and lead-up to the financial crisis of the 2000s. In the film, Ben Rickert, played by Brad Pitt, is a former securities trader who has retired and escaped to Boulder to lead a bit of a survivalist lifestyle. Boulder also got the rom-com treatment with the 2007 film Catch and Release, starring Jennifer Garner and Timothy Olyphant. From sweeping shots of Boulder Valley to filming locations on Pearl Street Mall, these movies take advantage of some of Boulder’s most beautiful features.

Perhaps where Boulder has been most represented in pop culture over the years has been on television. In the American version of The Office, which ran from 2005 to 2013, Dunder Mifflin boss Michael Scott (played by Steve Carrell) announces in season seven that he’s moving to Boulder to be with his fiancée, Holly. A more prolonged ode to Boulder is the classic 1978 to 1982 sitcom Mork & Mindy, starring Robin Williams and Pam Dawber as the titular characters. A CU graduate, local music store employee, and resident who lives just blocks away from Pearl Street Mall, Mindy befriends the alien Mork, played by Williams, as he tries to study human behavior in the enigma that is Boulder.

Boulder also made television history when the creators of South Park, Matt Stone and Trey Parker, met as students at CU Boulder in the early 1990s. The long-running show is set in the fictional town of South Park here in Colorado but often satirizes any and every other actual Colorado city, including Boulder. “Die Hippie Die,” episode two of the show’s ninth season, in particular gives Boulder the South Park treatment and is an ode to Boulder’s reputation as a counterculture haven.

Boulder may have not yet gotten the Michener treatment like Centennial did back in 1974, but that doesn’t mean it hasn’t attracted the attention of other noteworthy authors.

In the mid-1970s, famed writer Stephen King lived in Boulder for just under a year, and the city left quite an impression. During his time in Boulder, King wrote The Shining, a book set in a fictional hotel in the Colorado Rockies and published in 1977. This work, in part inspired by King’s time spent at The Stanley Hotel in neighboring Estes Park, would spawn the classic horror film adaptation starring Jack Nicholson and Shelley Duvall. After leaving Boulder, King completed his novel The Stand, published in 1978, which prominently features Boulder as the setting, a gathering point where a band of survivors of a post-apocalyptic superflu congregate. This work was also made into a mini-series in 1994 that was partially filmed in Boulder.

One of King’s other most well-known works, Misery, published in 1987, is likewise set in the Boulder area. It’s in a particular room in the Hotel Boulderado that the character of Paul Sheldon, a novelist, has completed the first draft of each of his novels and, while the story moves to a fictitious Colorado mountain town both in the novel and the 1990 film starring Kathy Bates, this Boulder landmark is still featured prominently.

Colorado’s Rocky Mountains have been the inspiration for many a ballad, from “America the Beautiful” to “Rocky Mountain High,” and Boulder is no stranger to getting called out on the airwaves as well. From being the home of the roommate whose mattress is stolen in 2016’s “Closer” by The Chainsmokers featuring Halsey, to where the woman Garth Brooks is pining after has moved to in his 1991 song “What’s She Doing Now,” Boulder has been featured in songs by artists from The Nitty Gritty Dirty Band (“Colorado Christmas”) to Emmylou Harris (“Boulder to Birmingham”) and, naturally, John Denver (“I Guess He’d Rather Be in Colorado”).

Did we miss any Boulder pop culture references? Give us the scoop and let us know in the comments!

Sign up for our FREE weekly email with Boulder’s best events, concerts, happy hour deals, comedy shows and more. Delivered to your inbox every Friday!
PrevPreviousSeniors in Boulder: 5 Activities in the Boulder Spirit
NextLocal Social Activism: Nonprofits in BoulderNext