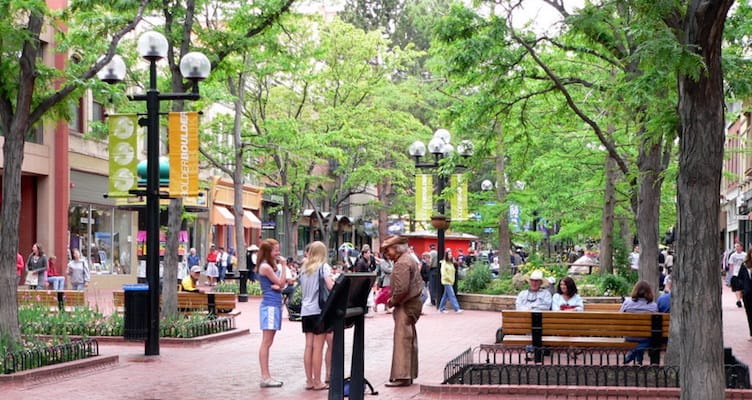 For those of us Boulder transplants who have fallen in love with Colorado and with this city in particular, we can’t imagine Boulder without Pearl Street Mall. A window-shopping, cultural, community-centered mecca of Boulder, Pearl Street Mall is much more than just a tourist attraction.

Yes, visitors can peruse the mall and pick up a Patagonia fleece, a CU Buffs tee, or a Colorado state flag refrigerator magnet, On Pearl Street between 11th and 15th, however, one will find an outdoor walking mall that houses stories from Boulder’s history and culture and an area that is the quintessential core of the city.

Boulder began to develop as a city in the late 1800’s as a supply town for gold miners in the nearby mountains. It was this population of gold-hungry adventurists that first mapped out Pearl Street, beginning at one end with what is today the intersection of Pearl Street and Broadway, and extending it eastward in a straight line. Pearl Street was the commercial center of the city, a place where merchants and storeowners were constantly looking to attract patrons, advance business, and improve the outward appearance of their establishments.

Throughout the years, Pearl Street consistently evolved and was modernized as it transitioned from a supply town to a railroad town to a full-fledged city with its own identity. At first essentially a muddy road, improvements to Pearl Street began with store merchants themselves who constructed wooden walkways to make their shops more accessible and attractive to patrons.

Wooden sidewalks would eventually be converted to flagstone, just as the main method of transportation along Pearl Street shifted from horse drawn streetcars to motorized and electric streetcars over the years. Pearl Street was also the location of many of Boulder’s firsts as a city, with the section of Pearl between 11th and 17th Streets having been the first paved section of road completed in Boulder in 1917, and with the first streetlight in Boulder erected at the corner of today’s Pearl Street and Broadway.

The pedestrian-friendly Pearl Street Mall that the stretch of road between 11th and 15th Streets is today was not officially established until the 1970’s. After the 1960’s, a decade that was characterized by social upheaval across the country, Boulder’s downtown area was suffering as the result of a drastic increase in population, elevated crime rates, and the popularity of larger and more convenient shopping areas on the more suburban outskirts of the city.

As early as the late 1960’s, Boulder citizens recognized this and began setting up planning committees to revitalize the downtown area. It was out of these planning committees that architect Carl Worthington’s four-block pedestrian mall concept came to light and was eventually approved. The project was aided by legislation such as the Public Mall Act passed by Governor John A. Love in 1970, which allowed for cities in Colorado to close off sections of roads to automobile traffic in order to accommodate pedestrian malls, and, after many years of planning and approvals, the Pearl Street Mall was officially dedicated and opened on August 6, 1977. Pearl Street Mall has since been an ever-evolving and ever-active center of Boulder’s community, blending the artistic with the commercial and enterprise with local flair.

Even before Pearl Street Mall was the pedestrian mall it’s known as today, Pearl Street was consistently an integral part of (and withstood) some of Boulder’s most noteworthy historical occurrences. Having narrowly missed being directly affected by Boulder Creek’s 1894 flood, Pearl Street likewise withstood Boulder’s historic blizzard of 1913, shutting down for only a short amount of time before being plowed and opened for business traffic by local citizens.

The focal point of various community legends and myths (did the flood of 1894 actually raise the elevation of Pearl Street?) this street has likewise survived arson (the inadvertent detonation of a boxcar full of dynamite and the ensuing fire in 1907 on the nearby Canyon Road) and has been an example of controversial social trends and movements, having housed several saloons and, for a short time, second story “bawdy houses” in the early twentieth century. Many buildings within Pearl Street Mall have unique histories in and of themselves, and there is a focus on historic preservation in the entire area.

Pearl Street Mall has seen a plethora of events, festivals, trends, and unique situations throughout its years of existence. It has seen a decade of such hard Halloween partying in the 1980’s (the infamous Halloween “Mall Crawl”) that festivities caused police to practically shut down the downtown Boulder area in 1990, exhibits of famous spacecraft (Boulder-born Mercury 7 astronaut Scott Carpenter had his spacecraft displayed on Pearl Street briefly in the 1960’s,) Mickey Mouse displays on the street’s lamp posts during the holidays in 1936 to promote patronizing local merchants, renovations of historic buildings, lauded bars, restaurants, and rooftops, and more.

Today, visitors of Pearl Street Mall can find one-man bands, street performers, balloon animals, food carts, elaborate and festive light displays in the winter, and tulips with bulbs the size of your palm in the spring and summer. The mall hosts various festivals, from Arts Fest in July to the Fall Fest in September.

If you step just a couple blocks off the pedestrian mall you will find rows of restaurants serving all types of fare to an award-winning coffeehouse to a used bookstore to small clothing boutiques. The East End and West End of the mall as well as Walnut and Spruce, the streets parallel to Pearl Street, hum with activity and feed off of the mall’s energy.

There is never a shortage of unique Boulder intrigue on Pearl Street Mall, and it is an absolute must-visit for locals and visitors hoping to experience the cultural core of Boulder. As someone who hopes to make Boulder their home for many years to come, I cannot wait to continue to experience Pearl Street Mall as it evolves, adapts, and changes, always representing the Boulder community.

Sign up for our FREE weekly email with Boulder’s best events, concerts, happy hour deals, comedy shows and more. Delivered to your inbox every Friday!
PrevPrevious2-for-1 Drinks All Summer Long With the Boulder Passport – On Sale Today!
NextExplore Boulder: The Flagstaff Nature CenterNext