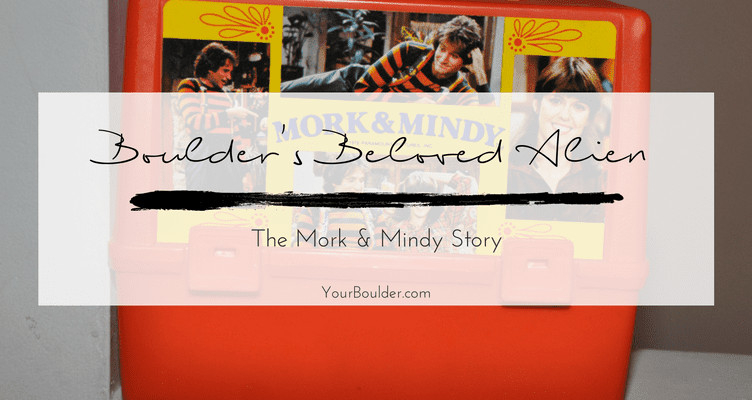 Throughout his career, Robin Williams was a multigenerational talent, enigma, and cultural icon. Whether your instilled image of him is as the therapist from Southie in Good Will Hunting, a desk-climbing professor in Dead Poet’s Society, or the voice of the charismatic Genie in Aladdin, to Boulder, Robin Williams will always be the ever-curious alien, Mork from the planet Ork, on the comedy sitcom Mork & Mindy. Sent to Earth to study human behavior, Williams’s extraterrestrial character not only transformed a simple Boulder house a few blocks from Pearl Street Mall into a city icon, but he also helped in continuing to further Boulder’s reputation in the late 1970s and early 1980s as a city with intense, colorful, and ever-quirky intelligence and potential.

If in your childhood you ever stayed up past your bedtime to watch Nick at Nite programming on Nickelodeon, all it takes is the mention of the show Happy Days to get its theme song irrevocably stuck in your head. In a February 1978 episode of the long-running series, viewers were introduced to Mork, an alien from the planet Ork, in a zany, science fiction-themed episode. In what was meant to be a wacky, one-off episode, the character of Mork proved to be so popular, attributed mainly to the manic charisma of actor Robin Williams, a relative unknown at the time, that Ork simply had to remain earthbound and in the tube somehow.

Mork & Mindy, starring Robin Williams and Pam Dawber as the titular characters, brought Mork back into viewers’ homes, and the show premiered in September 1978. Expanding on the story of Mork, the show drops him into Boulder, Colorado, in the late 1970s with the mission to transmit information on human behavior and culture back to his home planet. Mork befriends Mindy, a quintessential local Boulder woman, who has graduated from a local high school and the University of Colorado and is working at a music store while living just blocks from Pearl Street Mall. Mork moves in with Mindy as the two strike up a friendship, giving Mork a companion as he continues to try to understand the society he’s found himself in.

A show that made a name for itself by being, in a word, wacky, Mork & Mindy was hugely popular in its first season. The show not only served as a springboard for the career of Robin Williams, but would also shine a spotlight on the city of Boulder. Having been a young counterculture haven in the late 1960s, Boulder had just recently gone through a gigantic population increase in the early 1970s before Mork & Mindy premiered. Pearl Street Mall had been built and was beginning to become the place to be. A town with a youthful vibe and young average age, Boulder was a quirky city perfectly suited for Robin Williams’s own quirky Orkan alien.

In the show, Mindy and Mork reside in a Queen Anne style house at 1619 Pine Street, just a few blocks from Pearl Street Mall and Boulder’s cultural epicenter. The city is so often referenced within the show that Boulder essentially becomes a character in and of itself. Not only is Boulder the physical backdrop for Mork’s interactions and discoveries, but also provides a colorful petri dish of culture for Mork to navigate as well.

While Mork & Mindy may have only run for four seasons, with the finale airing in 1982, the more than 90 episodes in which Robin Williams brought Mork to life were more than enough to earn an extremely loyal local following. Upon his untimely death in August 2014, mourners in Boulder gathered at Mork and Mindy’s fictional Pine Street residence to pay their respects and reflect on the cultural phenomenon that was both the show and Robin Williams. From families explaining what an Orkan was to their children to prominent political figures in the state, such as Jared Polis, paying their respects, locals paid and continue to pay homage to the creative genius and charisma that transformed a simple house in Boulder into an important historical and cultural landmark for the city.

The house within the community that played such a prominent role in Mork & Mindy is not a museum or public building and is, in fact, privately owned. The next time you’re driving down Pine Street, though, give a nod to the memory of a uniquely different show starring a uniquely different creative talent that celebrated and highlighted the quirks of our culture and our city.