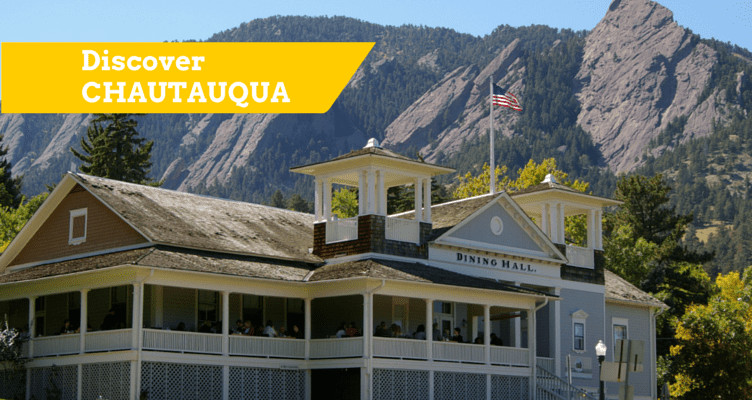 At the foot of the flatirons here in Boulder, the Colorado Chautauqua is the historical and ongoing embodiment of these two Boulder principles. Not only does the Chautauqua area boast the entrance to incredible hiking trails and historic buildings with breathtaking views, but it is also entrenched in a history of social, cultural, and educational enrichment, that Boulderites are enormously and steadfastly proud of.

The history of the Colorado Chautauqua in Boulder is best described through the lens of the overall Chautauqua Movement in the United States in the late nineteenth and early twentieth centuries. The first “Chautauqua” was located on the shores of Chautauqua Lake in southwestern New York.

Originally called the Chautauqua Lake Sunday School Academy, this center was founded in 1874 by Lewis Miller and John Heyl Vincent, Methodists who wanted to experiment with bringing education to people outside of a school setting and instead in a more retreat-style, vacation-like environment. With a core focus on education, this unique idea rapidly grew beyond religious instruction and presentations for Sunday school teachers, and evolved into artistic and academic subject matter, lectures, and readings, which began to be included in the annual summer sessions as well. With this expansion in educational content, the original New York educational center came to be known simply as the Chautauqua Institution.

The idea of a Chautauqua as a community learning center continued to garner popularity, especially for those who did not have the resources to attend costly college institutions. Chautauqua was their own unique form of secondary education.

The Chautauqua Literary and Science Circle was created in 1878 to continue to broaden the availability of education to all who desired it, and students were given a certificate upon course completion and, even moreso, were taught the value of the healthy, productive, and overall enriching experience of including learning in one’s leisure time. The success of this group was extraordinary, and chautauquas sprang up across the country both in the form of traveling chautauquas and permanent town establishments.

Communities began putting on chautauquas of their own to provide intellectual stimulation for their residents through open forums, speakers spreading revolutionary ideas, music, the arts, and general self-improvement. The Colorado Chautauqua Association website notes that, at the height of the Chautauqua Movement in the early twentieth century, about 12,000 communities had either put on or hosted a chautauqua.

The Colorado Chautauqua in Boulder came to be in the 1890s as the result of a desire by the Texas Board of Regents to create a summer school for teachers at a desirable destination. Boulder won the bid to be the location for this cultural and educational learning center, and the Texas-Colorado Chautauqua (as it was then called) came to be.

Billed as the most significant and educational retreat west of the Mississippi River that had ever congregated, the first summer session at the Colorado Chautauqua kicked off in July of 1898. Over the coming decades, the Colorado Chautauqua (also known simply as Chautauqua Park) directly contributed to Boulder’s up-and-coming status as “not just a pretty place,” but rather a sophisticated and innovative city.

Consisting of 40 acres of land at the base of the flatirons off of Baseline and Kinnikinic roads in Boulder, the Colorado Chautauqua is a National Historic Landmark and sees over half a million visitors, from out-of-town tourists to locals playing in their city’s backyard, every year. The area houses lodges, a Dining Hall, an Academic Hall, an Auditorium, and more.

Historically, the Colorado Chautauqua has seen events, performers, and speakers such as Stephen King, Ziggy Marley, Yo-Yo Ma, former Vice President Al Gore, symphonies, and more, all with an underlying focus on education and meaningful enrichment. The Chautauqua Park area has been the site of makeshift ski slopes (the Chautauqua Mesa Ski Area in the 1940s) and is today the venue for weddings, company retreats, the Colorado Music Festival, continuous educational sessions, and more.

Boulderites today are just as proud and protective of their Colorado Chautauqua as they have ever been. The Chautauqua Trailhead adjacent to Chautauqua Park spouts off into multiple trails that offer some of the best views, historical intrigue (such as on the Chautauqua Historic Loop,) and natural open space in Boulder.

With a mission and values that focus on not just continuous education, but also preservation and improvement in terms of the physical space and the overall spirit of Chautauqua Park, there has been a recent emphasis on Chautauqua preservation and restoration. Programming at Chautauqua Park runs year-round, and the Chautauqua area and neighborhood continues to be a hub for film, music, education (see their extremely diverse and varied event calendar,) leisure, hiking, and more (see additional reasons why Boulderites love Chautauqua Park here.)

A venue for outdoor enthusiasts, intellectuals, and anyone with a curious and open mind, Chautauqua Park is a living and breathing pocket of Boulder’s history. A Boulder mainstay, Chautauqua Park continues to embody the essence of what Boulder and Boulderites have valued historically and continue to value today.