From Colorado to Hollywood: A History of Dalton Trumbo 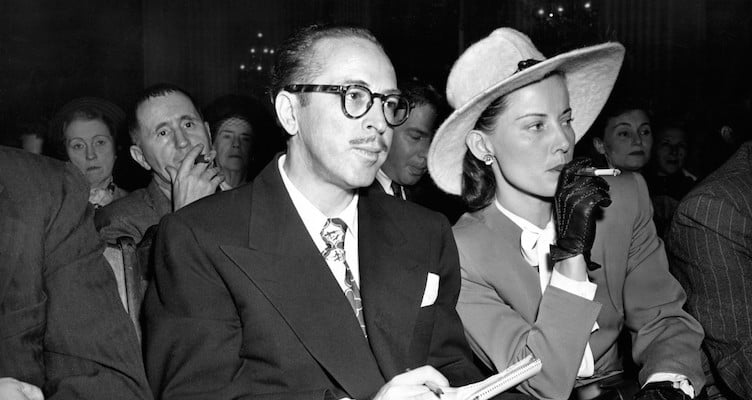 There are stories behind every famous and well-known name, whether that name appears on a monument, a building, or a plaque of any kind. There’s a reason that those names are noteworthy. Sometimes this recognition is due to fame, contributions to society and the arts, notoriety, or sometimes a little bit of all those things combined.

As is the case with Dalton Trumbo, a Colorado native for whom the fountain area north of the University Memorial Center at the University of Colorado Boulder is named, the name Trumbo has varied associations, from Hollywood to multiple famous films to controversy and Communism.

Dalton Trumbo was born in 1905 in Montrose, Colorado. Growing up in Grand Junction, an experience which he would later use as inspiration for his novel Eclipse in 1935 (much to the chagrin of some Grand Junction natives), Trumbo was involved in the writing community at an early age, writing for the Grand Junction Daily Sentinel, a western Colorado newspaper, while in high school. Trumbo then attended the University of Colorado Boulder for two years in the early 1920s, writing for the Boulder Daily Camera and multiple campus publications.

Trumbo moved from Colorado to California and began his larger writing career in the 1930s for magazines and studios in Hollywood. Trumbo’s career in movies began in 1937, writing screenplays such as Kitty Foyle (starring Ginger Rogers in 1940) and Thirty Seconds Over Tokyo (1944), but he continued writing novels too. One of his early novels, Johnny Got His Gun (1939), an anti-war narrative inspired by a severely wounded Canadian soldier in World War I, would instigate some of the controversy surrounding his name in the years to come. Although he had become a very well-respected name in Hollywood, it wouldn’t be long before Trumbo’s name would not just be associated with his work, but also with his political views.

The rivalry between the United States and the Communist Soviet Union, with suspicions and tensions high throughout World War II and in its aftermath, reached a peak during the Cold War era beginning in the 1940s. From fears concerning espionage to overall Red Scare sentiments and a deep paranoia over Communism, the U.S. government made moves to out Communist sympathizers and uncover supposed Communist activities in the country. In 1945, the House Un-American Activities Committee (HUAC) became a standing committee with the intent of shining a light on subversive activities attached to Communism in areas of influence in the country. Hollywood was considered to be one such sector.

There were multiple reasons that Trumbo became a target of the HUAC, including his reception of letters from citizens throughout World War II with Nazi sympathies citing his work Johnny Got His Gun as inspiration (letters which Trumbo handed over to the FBI). Trumbo was also an actual member of the Communist Party, having aligned himself with their values as early as 1940 and officially joining the party in 1943. In 1947, when Trumbo was called with a large group of other Hollywood screenwriters, producers, and directors, to testify in front of the HUAC on suspicions of Communist ties and inserting undertones of Communist propaganda, whether they be subtle or overt, into their films, he became one of the famous Hollywood Ten who cited First Amendment rights and refused to give the committee any of the information they were looking for. Trumbo was sentenced and detained for nearly a year for contempt of Congress.

Being blacklisted by Hollywood meant that Trumbo was no longer allowed to work in the industry, officially at least. Like hundreds of other artists in Hollywood who were either blacklisted or boycotted against over the years at the height of the paranoia over Communism, including the likes of Charlie Chaplin and Orson Welles, Trumbo continued to work under pseudonyms in order to have his films made.

The stigma surrounding the blacklist began to weaken as the years went on, and Trumbo did begin to receive credit for his screenwriting work. Many point to an instance when Kirk Douglas, star of the 1960 film Spartacus, which Trumbo wrote the screenplay for while still blacklisted, announced that Trumbo was the screenwriter of the film, as a contributing factor to the end of the blacklist in Hollywood. Trumbo was also given credit for his work on Exodus (starring Paul Newman in 1960) and Roman Holiday (starring Gregory Peck and Audrey Hepburn in 1953), and he was recognized by the Academy in 1975 as the winner for the screenplay of The Brave One, a 1956 film, which he’d written under a pseudonym.

It was in the early 1990s that a group of students at the University of Colorado Boulder began a campaign to recognize Trumbo on campus and, with the help of some faculty and other notable names in Hollywood, such as Robert Redford, who spent time working as a janitor at The Sink on The Hill, the fountain area outside the University Memorial Center was named the Dalton Trumbo Fountain Court, recognizing him for standing for his principles even at great personal cost.

Trumbo’s life has been recounted theatrically multiple times since his death. From a Broadway play helmed by his own son, Christopher Trumbo, called Trumbo: Red, White, and Blacklisted, to a documentary-style film based on that play in 2007 called Trumbo. A movie of the same name, Trumbo, was released in November 2015, as a dramatization of Trumbo’s life. The film stars Bryan Cranston of Breaking Bad fame, who is nominated for the Best Actor Oscar at the Academy Awards airing on February 28th.  The film can be seen at the Landmark Mayan Theatre in Denver.