History of the Boulder Reservoir 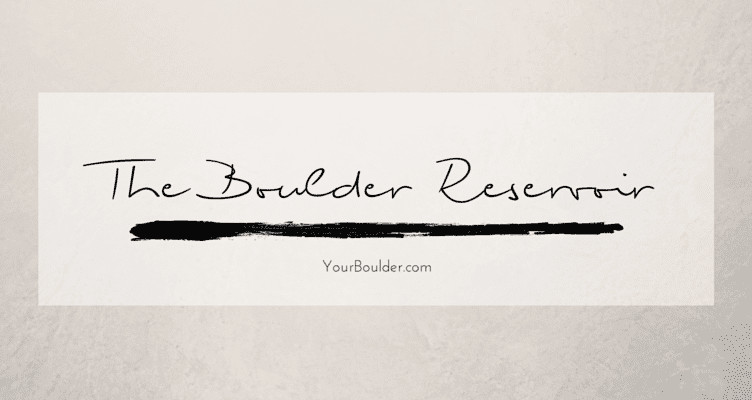 Boulder’s culture often reminds me of my time spent living in San Diego. In both locales, a sunny day means more bikers on the road than cars. Walks on the beach are swapped out with hikes in the mountains, and even the city layouts and roads are similar, with prime real estate in San Diego being “west of the 101,” the Pacific Coast Highway, as close to the ocean as possible, and the most desirable living in Boulder being “west of 93,” or Broadway, right at the foot of the mountains.

The glaring difference between the two, of course, is that while San Diego has the ocean, Boulder has its mountains. That doesn’t mean that Boulderites don’t also crave the fun and freedom of splashing and swimming and, as the summer months begin, Boulder Reservoir is the perfect local solution for that aquatic amusement. With a history that blossoms from basic need to local luxury, the Boulder Reservoir is both a vitally important water resource for Boulder while also being a quintessential part of Boulder’s active lifestyle.

As Boulder was being settled in the late 1800s by prospectors, gold-seekers, and farmers, the use, diversion, and appropriation of water was one of the first major issues they faced. While seemingly ample streams and creeks ran down from the Front Range, which get more rain and snowfall than the Boulder Valley, how water could be most efficiently used in this dry, semi-arid climate was a predicament.

Boulder’s first attempts at creating water storage, supply assurances, and structures for the city’s population vastly underestimated the growing city’s water needs. In 1875, Boulder constructed its first storage reservoir in Sunshine Canyon, which was filled by Boulder Creek. However, it would take only four years for the city to outgrow that water supply. Mine waste likewise flowed from the hills into it, and new solutions had to be found.

In 1904, the City of Boulder began purchasing land along North Boulder Creek and created what would become the Silver Lake Watershed. This area of land, which included bountiful reservoirs fed by snowmelt and the melting of the Arapahoe Glacier, sufficiently kept Boulder hydrated until the 1950s. During the 1950s, however, the population of Boulder boomed and, combined with years of severe drought, the city’s water supply limits were tested. It became clear that more sustainable solutions to Boulder’s water problem had to be innovated.

The creation of Boulder Reservoir was one such solution. The City of Boulder purchased land from the Axelson family’s dairy farm, and construction on the reservoir began on May 1, 1954. According to the City of Boulder, the project cost $1,158,027 and took under a year to complete, with construction ending on February 11, 1955. Soon after, the reservoir began being filled from the Colorado-Big Thompson Project, and 75 tons of sand were delivered to the site to create a beach area along the southeast shore.

Originally meant to be used for water supply and irrigation, the reservoir became a popular recreational destination for locals almost instantaneously. Locals jumped at the chance to have such a close and convenient place to swim, boat, fish, and hang out at a beach. During July 4th weekend in 1955, just months after the reservoir was completed, over 1,400 cars paid the admission price of just 25 cents to spend their holiday weekend at Boulder Reservoir.

The reservoir’s recreational popularity continued to grow. Concession stands, picnic structures, and outhouses were built and, in the 1980s, the beach area was moved to the more private southwest corner of the reservoir, where it is still located today. Boulder Reservoir became a place where locals could both enjoy the perks of being at the beach and the unobstructed mountainous views of the foothills.

Throughout the years, the Boulder Reservoir has played host to numerous events and races as well. Hugely popular amongst athletes with its five-mile loop trail circling around the reservoir, the site has hosted events such as the annual Polar Plunge, the Stroke & Stride race series, numerous 5k, 10k, and swim races, and the Ironman Boulder.

The reservoir is likewise a diverse ecosystem in and of itself and is the home of a variety of flora and fauna. From fish such as bass and catfish to numerous bird species and smaller critters, like rabbits and prairie dogs, outdoor sport enthusiasts will also find ample recreation at the Boulder Reservoir.

For all the entertainment that the Boulder Reservoir provides, it’s also important to remember that it’s a vital component of the city’s water supply. Boulder Reservoir currently supplies about 20% of Boulder’s drinking water. Boulder’s water quality goals are also even more restrictive than federal and national regulations, and more than 25,000 drinking water quality tests are performed annually throughout the city, ensuring that the water coming out of your tap is as crisp and fresh as the snowmelt it came from.

Boulder Reservoir is a wonderful place to relax during the summer, whether you’re looking for a place to picnic, swim, play volleyball, or bask in the sun (don’t forget that sunscreen!). For more information about picnic sites and rentals, special events, admission prices, hours, and more, be sure to visit the City of Boulder website.

Sign up for our FREE weekly email with Boulder’s best events, concerts, happy hour deals, comedy shows and more. Delivered to your inbox every Friday!
PrevPreviousWhile the Students are Away: Summer in Boulder
NextA Slice of Boulder: Meet Pie in the Sky Bakery’s Gluten-Free GoodnessNext