Eyes to the Sky: Boulder’s NCAR and the Mesa Lab 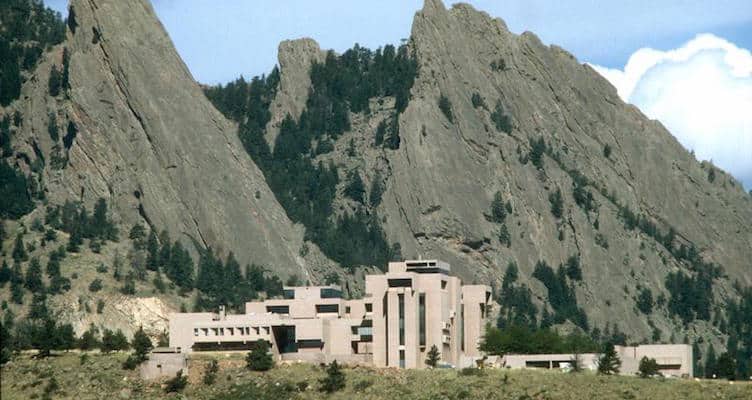 One of the first things that struck me after moving to Boulder was just how big the Colorado sky is. In Boulder, you can watch thunderstorms blow in from over the flatirons, track clouds as they roll across the sky from the plains, see spectacular lightning shows, and look upward to a vast and dynamic view in all directions.

The National Center for Atmospheric Research (NCAR), based in Boulder since the 1960s, has worked since its inception to further research and examine the science behind the atmosphere and to educate and connect the community with the weather phenomena we so often have front row seats to across the Boulder sky.

NCAR’s beginnings can be traced back to World War II, when military missions and operations were more advanced both in scale and in use of technology than in any prior war. Success rates and efficiencies of assaults, attacks, and plans both large and small were often directly tied to the weather and climate. This led to a surge in research on meteorology, as demand was high for military personnel with knowledge of weather and forecasting.

While this led to the expansion of university departments and training programs during the 1940s, the post-war years marked a sharp drop in the expansion of the meteorology field, as most people with these skills were using them as tools for their professions, not as a means for proactive research.

The meteorology and atmospheric research fields were reinvigorated in the 1950s, as it was realized that the potential problems with not having adequate knowledge about the atmosphere’s interconnected relationships with the rest of the world’s geography could be catastrophic. Both the National Science Foundation (NSF) and the University Corporation for Atmospheric Research (UCAR) were established in the 1950s as a means to begin finding ways solve this problem.

While the NSF is a government agency, UCAR is a nonprofit that began as a handful of scientists, largely from universities within the United States, who wanted to help facilitate the growth of scientific research programs of a larger scope than single universities would be able to feasibly handle. These two young organizations partnered to create the National Center for Atmospheric Research (NCAR) in Boulder in 1960, with UCAR managing NCAR on behalf of the NSF. NCAR brought atmospheric research to a global level and aimed to foster the connection between the public and this knowledge.

Today, UCAR is made up of over 100 member colleges and universities who share their commitment to furthering the atmospheric and Earth systems science fields. These members also help to govern UCAR in order to provide NCAR with guideline priorities to direct their research efforts. While NCAR is not officially affiliated with the University of Colorado, the University of Colorado is among UCAR’s member institutions.

NCAR has multiple facilities in Boulder and Broomfield, Colorado, as well as a division that oversees the Mauna Loa Solar Observatory in Hawai’i. NCAR’s roots, however, are here in Boulder, and, with a mission statement that highlights the need to “foster the transfer of knowledge and technology for the betterment of life on Earth,” NCAR is proactively fostering these educational connections throughout the Boulder community.

At the westernmost tip of Table Mesa Drive in southern Boulder, at an elevation of over six thousand feet, the Mesa Laboratory is NCAR’s flagship lab and headquarters. This complex is both a center of research, collecting weather data and tracking weather patterns, and a Boulder community educational hub.

Built in the late 1960s, the Mesa Lab was designed by renowned architect I. M. Pei with a design emphasis that is meant to foster interactions between those working within the building (a strong belief of NCAR’s founding director Walter Orr Roberts) while simultaneously blending into the flatirons that the complex is nestled amongst. An award-winning and often lauded building, the Mesa Lab is the location of NCAR’s Visitor Center, offering tours of the facility across multiple mediums (via tour guide, tablet, cell phone, or self-guided,) a cafeteria, public events, rotating art and science exhibits, and hands-on educational lab experiences for students on field trips, visitors, and the general public. A Boulder fixture, the Mesa Laboratory is the physical embodiment of the mission of NCAR.

Driving to the Mesa Lab in South Boulder on any given day, you are sure to see visitors eager to take advantage of the education available within the Visitor Center as well as runners and bikers on the sides of the road and hikers starting out on the NCAR Trailhead, which connects to both Boulder’s Chautauqua Park and the South Mesa system of trails.

Both NCAR and UCAR have large online presences as well, from their “AtmoNews” Twitter account to their Facebook pages dedicated to the organizations themselves as well as their joint Science Education program. UCAR’s Center for Science Education has an online blog and Learning Zone filled with educational activities, games, and tidbits of information related to weather, the atmosphere, and current hot topics in the field. Across multiple mediums, NCAR works to fulfill its mission by encouraging Boulderites to better understand the atmosphere around us and how we are inextricably connected to it.