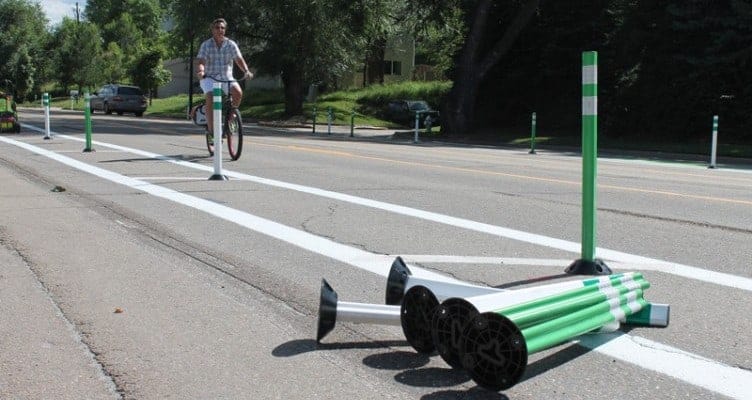 Boulder has long been known for boasting one of the greenest populations of commuters in the state, and even the country. To go along with this, Boulder transportation planners have been implementing innovations to encourage and make smoother much of our green commuting. From the Great Boulder Bike Trail to the addition of more sustainability in our public transit, the City of Boulder is rewarding its 38% completely carless commuters.

So after a new innovation in “Right Sizing” bike lanes on Folsom Street, why would cyclists dress in mourning, and leave bikes covered in fake blood in protest?

The “Right Size” bike lane project was a pilot program designed by transportation planners as a way to decrease congestion and increase cyclist safety, loosely based on some similar designs in Europe. The wider bike lanes, flexible posts as barriers to the bike lanes, and center turn lane were all designed with the bicycle commuter in mind. Sure, the widening of the bicycle parts of the street made Folsom from a 4-lane road to a 2-lane one, but planners thought the car-traffic flow would be affected negligibly. Folsom boasted this new “Right Size” design from Valmont to Canyon, and plans were afoot to do similar adaptations to Iris and 63rd streets, as well.

This went just a little bit…awry.

Car-traffic congestion increased on Folsom to such a degree (especially in the afternoon rush hour times), that Boulder city council voted to undo the “Right Sizing” project due to “vitriol” from a large portion of Boulder commuters, who complained of not only the traffic jams, but actually cited more danger to bikers, as the new center lane made bikes more interwoven with the cars. The plastic bike lane barriers also threatened more car damage for motorists navigating to avoid them on a now-narrower street (and if you live in Boulder, you’ll recognize Folsom as being one of the windiest roads in town). So in early October, the scale-back of the “Right Sizing” began, much to cyclists’ chagrin.

When the decision passed to remove the new “Right Sized” lanes, cyclists in mourning poured onto Folsom to decry the decision to reverse what they felt was progress towards a policy of fewer cars on the commute roads. Anonymous protesters left bicycles bloodied with red paint as symbols of the danger that cyclists were in again now that the “Right Size” decision was reversed.

The protected bike lanes will remain in place from Pine to Valmont and from Arapahoe to Colorado, but most of Folsom will go back to its customary four lanes once more.