A Snowstorm to Remember: December 1913 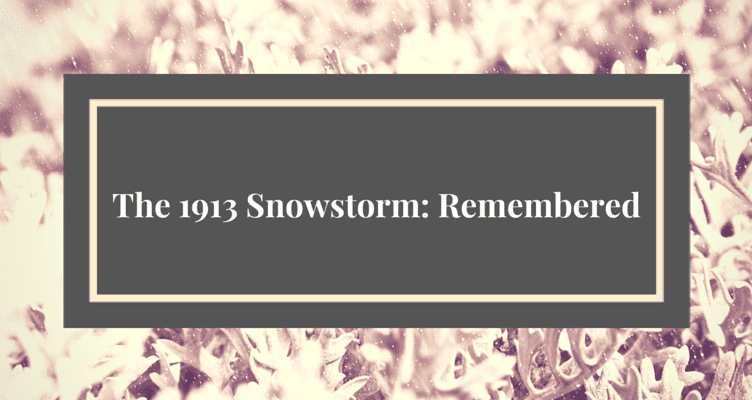 First things first — we post about a snowstorm and WHAT, no photo-packed post? We’re very conscious about copyright laws, and most of the photos available from the storm are copyrighted and not available for re-use. So, here’s a link to the best galleries we’ve found snowing the true depth of the storm: Amazing photos at the Longmont Museum can be found here and check out this slideshow, The Colorado Daily had permission to use a few of those photos here, and the Denver Public Library has a CRAZY collection online here.

In Colorado it is pretty much a guarantee that, some way or another, there will be a total of 300 days of sunshine in a given year. Outside of these sunny days, though, Colorado is a state that is likewise known for having notoriously unpredictable weather. It’s a place where you can be tee shirt skiing in February, ducking under an umbrella for a week straight in July, or getting snowed out of a baseball game in the middle of May. You never quite know what’s in store.

Boulder is no exception to this curious and sometimes extreme weather. Just over a century ago in December of 1913, a huge snowstorm dumped an enormous amount of snow across the state, blanketing the Front Range in snow and forcing towns such as Boulder to be resourceful as communities to get through the storm safely.

The snowstorm that hit Colorado during the first week of December in 1913 has been called by many names, from the “Big Snow” to the “Great Blizzard” to the “Great Colorado Snowstorm.” A low pressure system over northern Arizona pushed a huge amount of precipitation into Colorado, and many cities across the state recorded record snowfall as the storm progressed. According to Colorado Public Radio, Denver received over 45 inches of snow throughout the storm. The hardest hit Colorado city was Georgetown, which received 86 inches of snow. As a point of comparison, do you remember seeing photos of Buffalo, NY, in November 2014? Over six feet of snow fell in the area in two days, and the national news and social media were littered with photos of Buffalonians in Bills gear standing on top of their cars and shoveling them out from the top down and whole door frames blocked by walls of snow. The snowfall in Georgetown during the 1913 blizzard was, in some spots, even deeper.

The storm overall lasted for about four days and, for Boulder’s part, there were two days of particularly extreme snowfall when over 43 inches of snow blanketed the city. This is deeper snow than the Eldora Mountain Resort just west of Boulder has at its summit as of earlier this week.

What might have initially looked like an idyllic winter scene did not last for long. Telephone poles and power lines collapsed under the weight of the heavy snow and many people were stranded at work, seeking overnight shelter in the homes of strangers and at local establishments such as the Hotel Boulderado. Transportation by streetcar and train became impossible, essentially cutting off the town from supplies and stranding some passengers in the train cars themselves. As most heating systems ran off of coal at the time, homes and businesses began to run low, and grocery store stocks became depleted as well, making rationing effectively hugely important. Schools and businesses closed and mail service stopped.

What could have been a disastrous situation never did take that overtly negative turn here in Boulder. Children took advantage of the snow days and went sledding, and citizens across the Front Range were reported to have walked, snow shoed, and skied in order to get about town. Those who owned horses and sleighs were able to begin plowing streets and sidewalks and replenishing stocks for some local businesses and, according to a Daily Camera article by Silvia Pettem, there were no deaths reported in Boulder as a result of the storm.

Citizens were paid to assist in shoveling efforts, and it took approximately two weeks for Pearl Street to be plowed after the blizzard. The storm led to better structural planning for buildings in the future to ensure they could stand up to heavy snowfall, and Boulder remained whole and resilient throughout the ordeal.

The potential for big snow is always a factor in Boulder in the winter. There are plenty of things you can do to ensure you’re prepared in case an impactful winter storm hits, from reading up on winter driving tips via the Colorado Department of Transportation to being aware of what streets are plowed by the City of Boulder. In the mean time, stay warm, stay safe, and enjoy the winter season!