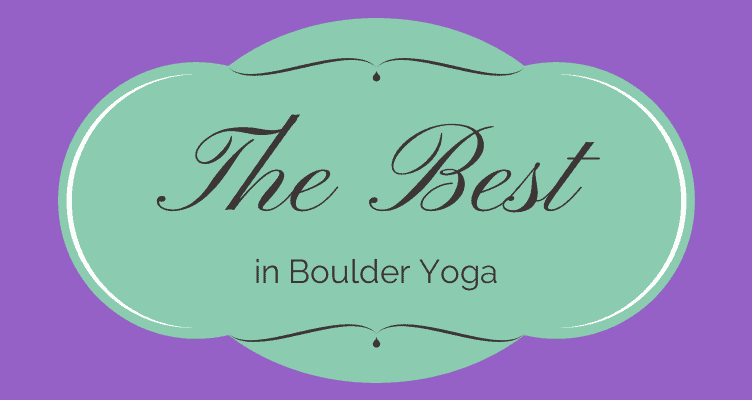 I’m going to get this out of the way right from the start. Boulder has more yoga studios than you can shake a thirsty towel at, so there is absolutely no way that I could give you a compendium of every single one of the studios. Don’t rake me over the coals if I missed your favorite place to get your downward facing dog on — just mention it in the comments so others can come check out the place you love to get Zen.

This is an aggregate of the top Boulder yoga studios that have top ratings on Yelp and Google, so if you’re new to the scene, you’ll definitely want to check these places out (and pay attention to anything mentioned in the comments on those sites since there may be additional insights there).

Holy moly, do Boulderites love this place. This earthy retreat is on South Broadway in the Table Mesa shopping center and has a number of vinyasa classes as well as an ultra convenient “Lunchtime Express” class designed for employees trying to squeeze in a good warrior pose over their lunch break. That’s just the beginning of the specialty classes they offer so sign up for their 10 days for $10 pack and give them a try.

One of the perks of this studio is that some of the windows face the mountains so the beauty of the slopes just outside the doors amplifies your flow. One unique offering that Boulder Bikram has is their kid’s classes. Children from six to 12 can sign up for a non-heated course to learn the basics of yoga (they’ll probably get the hang of it faster than any of us adults did). Another bonus: they offer a new student special of $49 a month for unlimited yoga!

Affordable and approachable; I bet those are two words you thought you’d never read when describing a yoga studio. Yet those are the overarching themes that you see when people describe this place. It’s $10 for drop in classes and there’s not the pretense that you can encounter at some studios throughout Boulder. The Little Yoga Studio offers a large variety of classes for every level, so whether you’re a newb or a pro, this is a great, authentic place to check out.

Yes, Iyengar yoga is slower than many other yoga practices, but it is a deeper, more connected pace, highly recommend for beginners, people recovering form injuries and folks looking for a more spiritual connection to their practice. The Iyengar Yoga Center has been a part of the community for 20 years, making it the hipster of yoga studios since they were doing it before it was cool (or hot, depending on how you like to practice).

This is a burgeoning franchise with three out of its four locations in Colorado. It’s a bright, sunny space where, according to the website, everyone smiles and laughs all the time. In all seriousness, the people who love this place are diehard fans. It’s a little more up-tempo than some of the other studios so keep that in mind, but they do offer a ton of classes. Plus, new students can get their first month for $40, which is not too shabby.

Now you have several places to try. My recommendation, especially for those of you tight on cash, is to do the introductory month or week at each one of these places, since you can get such a great deal, and try them all to figure out which is the best fit for you.