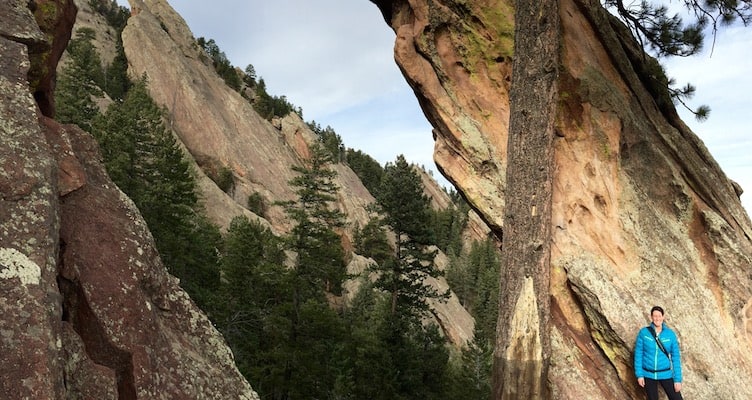 When Boulder’s iconic Royal Arch Trail reopened on November 8th after being closed for nearly 14 months, the scene was more “Times Square” than “Open Space.” Hundreds flocked to the newly rebuilt trail with curiosity and excitement. Hiking it was stop-and-go, as hordes of visitors shuttled up and down the narrow path.  Solitude was nowhere to be found. And yet the mood was high as people marveled at the new section of trail, the extensive damage still visible, and all the hard work that went toward bringing this beloved trail back to life after the flood.

Boulderites have been hiking to Royal Arch for over 100 years. Early photos show women in long skirts and men in coats and ties posing in front of the rock formation. “Rocky Mountain Joe” Sturtevant, a photographer and hiking guide, forged the first trail to the arch in 1898. In 1920, the City of Boulder purchased the land for recreation and conservation. And in 1921, E.M. Greenman, Eben G. Fine, the Boulder Rotarians, and a group of Boy Scouts joined efforts to build the trail that we know today.

Royal Arch has since become one of the most popular hikes in our system. Steep and strenuous, this trail is a true test of legs and lungs. For those who are up to the challenge, the rewards are great. After 1,300 feet of elevation gain, the sandstone formation is a stunning sight. Breathtaking views of the Flatirons and the city are icing on the cake. It’s no wonder that this hike has become a favorite of locals and tourists alike.

The 2013 flood threatened to end our love affair with Royal Arch. As the rain fell, streams of water began to intersect the trail. The rain continued to pelt down, until the flanks of Green Mountain were completely waterlogged. 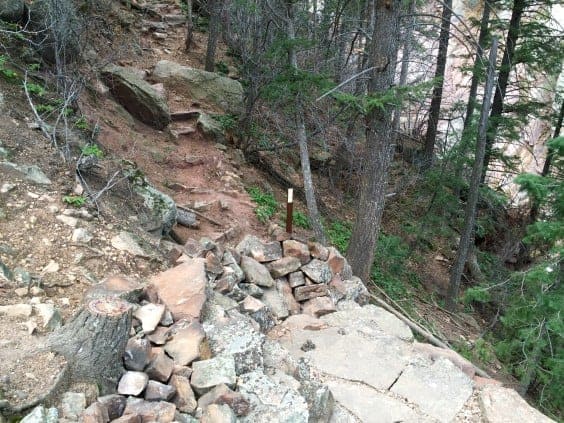 Eventually, the water diverted to the path of least resistance – the Bluebell Drainage.  This creek bed, typically dry for most of the year, borders the trail as it skirts up to the arch. The drainage swelled and became a torrent of water, mud, rocks, trees, and anything else in the floodwaters’ path. Mudslides ensued, taking a section of the trail along with it.

When the rain stopped and the waters subsided, Open Space and Mountain Parks trail crews hiked up to survey the damage. They were shocked by what they saw. Royal Arch Trail was one of the most damaged trails in the entire system. Several options for rebuilding were considered (including adding a bridge). Ultimately, it was decided that a new section of trail would be built above the original section that had been washed out. Due to the extensive damage, this was no small feat. The City of Boulder’s OSMP enlisted the help of the Front Range Climbing Stewards, a partnership between the Boulder Climbing Community and the Access Fund, along with local volunteers. After six weeks of hard labor, the new and improved trail reopened to an ever-grateful community. Thanks to the blood, sweat, and tears of these local organizations and individuals, Royal Arch will be hiked, run, photographed, and celebrated for years to come.

The Hike (approximately 3 miles round trip)

Always consult OSMP.org ahead of time for maps and temporary closures.

Begin at Chautauqua Trailhead. Head south on Bluebell Road.  At 0.7 miles, you’ll reach Bluebell Shelter. The sign for Royal Arch is just past the shelter.  Follow the trail through a picnic area and into a ponderosa pine forest. Chickadees and nuthatches are in abundance here.

At 0.9 miles, you’ll pass the junction for the 3rd Flatiron Trail. At one mile, you’ll pass through a boulder field, after which the trail begins its climb along Bluebell Drainage. Note the extensive damage in and around the drainage, which was deepened and widened during the flood. Large boulders and trees still balance precariously where the floodwaters deposited them over a year ago.

The new section of trail appears at 1.1 miles. To the right, you’ll see where the old trail was washed out into the drainage, and to the left is the new trail. This new section is less than a quarter mile long, but it’s easy to see how much work went into it. Freshly cut sandstone steps take you past a talus slope and into more ponderosa pine.

Please resist any urges to explore the old, washed out trail. It may look passable in some areas, but the dirt and rock is very unstable. Be smart and don’t put yourself (or anyone who might have to come help you) in danger.

At 1.3 miles, you’ll reach Sentinel Pass. This is a great spot for a rest or a picnic lunch. From here, the trail descends and views to the east begin to open up. Take care to stay on the main trail here – don’t get sidetracked by the social trails that intersect this area.

The trail starts to ascend steeply once more and now the arch can be seen through the treetops. At about 1.5 miles, you have reached the Royal Arch! Be sure to walk through it to the other side. From there, inch your way over to the eastern edge of the rocks, and look to the north.  It’s one of the best views in all of Boulder. 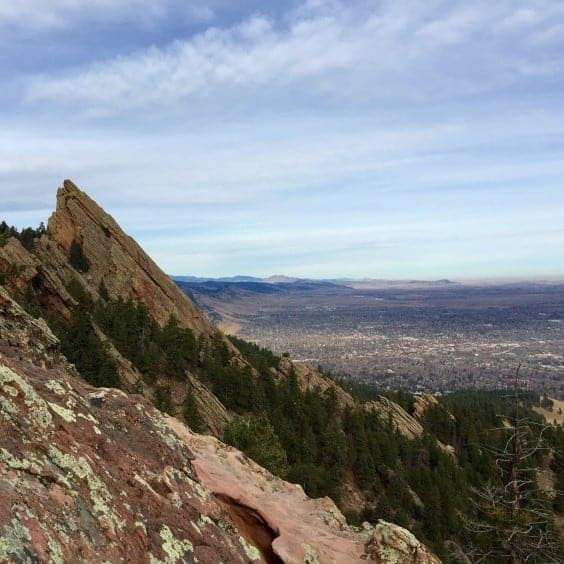 To return to the trailhead, go back the way you came. Happy trails, Boulderites!

Sign up for our FREE weekly email with Boulder’s best events, concerts, happy hour deals, comedy shows and more. Delivered to your inbox every Friday!
PrevPreviousPut a Bird on It (Boulder-Style): Boulder’s Backyard Birds
NextHiking with Kids: Stories in the SnowNext