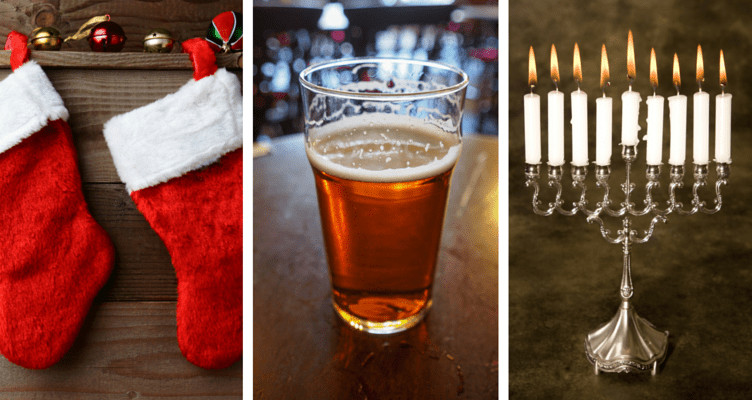 As those of us who live here know well, Boulder is a center of excellent microbrews and craft beers of all kinds. Naturally, such a beer-happy town will boast a plethora of winter- and holiday-style beers once December rolls around. Pretty much every brewery in town has a wintry offering happening right now, so you can’t go wrong wherever you enjoy your brews, but here are some of the holiday beers of Boulder that stand out this season.

This mahogany-colored Winter Strong Ale is a seasonal tradition in my personal quaffing circles. Not technically holiday spiced per se (though there is a touch of the hazelnut there in its flavor profile), it still is a rich and delicious fireside beer for the colder months. Now that Avery has its brand-spanking new tap house, enjoying an Old Jubilation there might have to be a new addition to my tradition.

Fate is known throughout Boulder beer circles for its bold flavor combinations (that actually work very well! A coffee IPA? Crazy, but tasty), and its Yule Log ale is no exception. It’s an English old ale, packed with spices and brewed with dried cherries. It’s a flavorful beer that tastes like what fruitcake should be.

Speaking of a darn good fruitcake,

Naughty Noël is a spiced, Belgian style holiday ale that is lightly drinkable despite its 8.9% ABV. It tastes like the best fruitcake you’ve never had, because fruitcake never tastes this good, though it should. A spicily warming brew for Pearl Street people-watching through Mountain Sun’s big windows.

This year, however, Upslope has unveiled the Wild Christmas ale, a wilder version of its namesake. What makes it wild? It’s been aged in Leopold Brothers rye whiskey barrels, and dashed with a dose of candied orange in its flavor profile. The Wild Christmas ale is a strong one, so 4 large-sized cans purchased per person is the taproom’s limit.

Walnut Brewery tapped their barley wine earlier this month, and it’s an unusual thing to find in a local brewery, so I wouldn’t miss a taste. Barley wine is strong like a wine, but tastes rich and roasted or grainy like a beer (depending on the brewery). Amongst all the warming holiday beers, a barley wine is probably the most warming of all, so if you feel cold this holiday season, go have a warmer. (Their other winter themed beer, the Sub Zero, will be tapped in early January so stay tuned.)

And finally — be sure to grab your Winter Warmer before it’s too late! $20 keeps you in 2-for-1 drinks specials all winter long around Boulder.