Café Aion: Style and Sustenance on The Hill 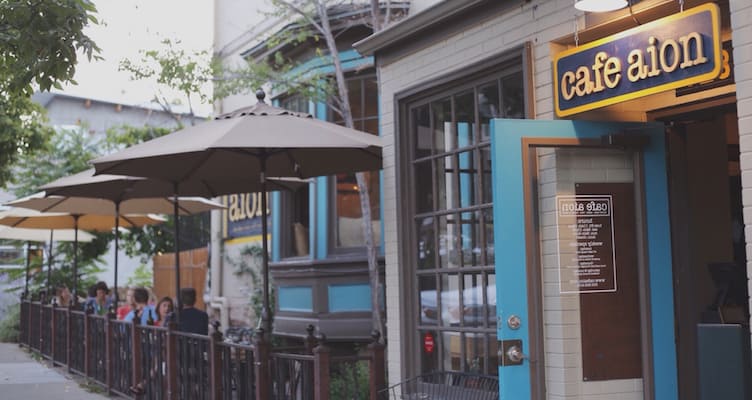 As a longtime resident of Boulder, I’ve had the pleasure of witnessing a lot of local change. Exceptional and delicious changes to the city’s restaurant scene. The dynamite-like boom of craft beer in the area. And the growth of neighborhoods like The Hill, which has always been known as the gathering place for late night partiers seeking cheap and hearty meals with magical powers of hang-over prevention.

While The Hill is still very much the after-party for students at the CU Boulder, somewhere in the past five years a dynamic dining shift occurred — thanks to a small but captivating eatery located in the historic brick building at 1235 Pennsylvania Avenue.

When Cafe Aion first entered The Hill’s dining scene in 2010, Boulderites couldn’t help but take notice of the bold move. Surrounded by burger, pizza, and burrito fast-casual joints, Cafe Aion offered up a cozy and welcoming dining room, with a delightful wine list, hand-crafted cocktails, craft beer, and a thoughtful tapas-based menu steeped in the flavors of Spain, Portugal, and North Africa.

“When we chose to open on The Hill, we knew it was a risk, but we decided to be one of the first restaurants to a try a different concept in the neighborhood,” said Cafe Aion owner and chef, Dakota Soifer. “When we first started up, we only had tapas on the menu. But we soon realized that if people were going to make the trip to The Hill, they were looking for a full dining experience. So we added paellas and a few other signature platters.”

Last week, Cafe Aion launched a new set of changes to a menu that has been a staple in their dining room for the past five years. Staying true to their foundation as a gathering place for people to share a meal and a memorable dining experience, Soifer and his team have expanded the tapas menu, which now includes nearly 30 tapas items, almost all of which fall at or under $8.

Dishes like the popular Fried Cauliflower, and Sweet Potato Fries with Cumin and Muir Glan Ketchup, and the flavorful Moroccan Spiced Pork Sliders with Spiced Yogurt are now finding themselves in the middle of a mass of plates filled with new tapas menu items, all stacked up on dining room tables occupied by hungry diners of all ages and budgets, eager to try several menu items without filling out their waistlines and emptying their wallets.

Along with the expanded tapas menu, Cafe Aion has also expanded their paella selections to include a Paella del Mar with saffron rice, clams, mussels and prawns, and a vegetarian paella option. Happy hour also got a little bit happier with the addition of $2 glasses of red or white sangria made with wine, fresh fruits, chili, and secrets. $3 locally-made draft beers and a handful of $5 cocktails are also being served up at happy hour along with the Aion Sangrias — all of which are served from 3-6 p.m. every night, and all night on Tuesdays.

And the tradition of Wednesday Paella Night still continues to thrive at Cafe Aion, although the changing paella menu each week really hits its stride in the the summer with the nights menu inspired by locally sourced ingredients found at the nearby Farmers’ Market every Wednesday night. Diners can enjoy the Wednesday Night Paella dish that typically serves 2-3 people, along with an expertly paired bottle of wine — all for $49.

And when Soifer isn’t busy rejuvenating The Hill’s dining scene, winning Cutthroat Kitchen on the Food Network, and creating tasty dishes from behind the open window of Cafe Aion’s buzzing kitchen, he’s helping bring more people and awareness to The Hill neighborhood. Along with other Hill business owners, Soifer founded The Hill Boulder, a non-profit created to promote the neighborhood’s diverse and eclectic retail, dining, and arts scene.

“The Hill is a cool and funky place,” said Soifer. His love for the area, his profession, and the art of flavorful, well-crafted, locally produced menu items have etched a food legacy into The Hill that is on track to lure in foodies and non-foodies alike for years to come.