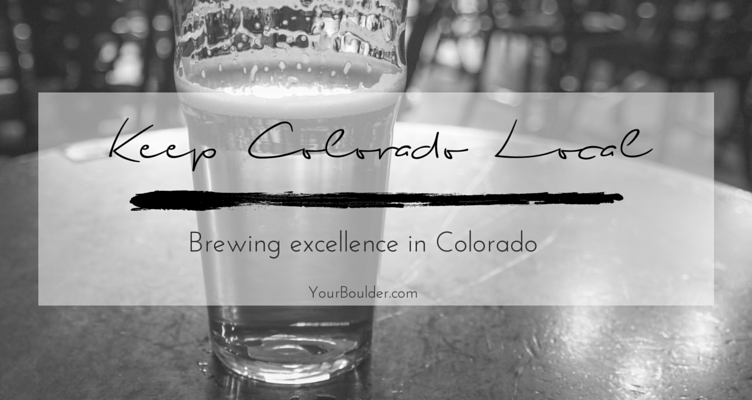 Boulder has a distinct identity. A place that not only accepts, but proactively fosters creativity, celebrates those who push boundaries, and challenges norms, Boulder is a mecca or artfulness and uniqueness. This is especially apparent in the area’s craft beer, wine, and liquor industries, and the ecosystem of entrepreneurship cultivated here is what makes the area so attractive and special.

Colorado’s liquor license laws create a level playing field for all retailers by enforcing a policy in which companies can only have one establishment in the state that sells full strength beer, wine, and liquor. This means that small independent and family-owned businesses get one license just the same as a large nationwide retailer or corporation would. Keep Colorado Local, a coalition of local businesses from breweries to liquor stores to distilleries to brewers guilds, is an organization determined to raise awareness and spread the word throughout the state about the importance of keeping these regulations unchanged so that the state’s craft industries, creative and entrepreneurial culture, and independent local businesses may continue to set the highest standards of product quality, grow, and thrive.

According to Bruce Dierking, founder and General Manager of Hazel’s Beverage World in Boulder, it’s not just this fairness of the competitive field that Colorado’s current liquor laws foster and protect.

“They create a level playing field and a low barrier to entry that foster entrepreneurship and innovation on the local level,” says Dierking. “Our laws also allow an amazing synergy between local producers such as craft brewers and craft distillers and independent retailers. Because the stores are owned locally, a new craft producer can walk in and talk to a decision-maker about getting on the shelf.”

Personable relationships and face-to-face interactions between producers and independent retailers in the area give creative, up-and-coming brewers and distillers the chance to grow at their own pace and on their own terms, setting them up for success in the long run and allowing them to continue experimenting and creating unique local products. This facilitates growth for the independent retailer and brewer and also trickles down to the root of the products’ creation.

“Because our laws result in so many Colorado-owned producers, distributors, and retailers,” says Dierking, “most of the profits stay right here in Colorado, which in turn benefits all kinds of other small, local businesses who provide products and services to our independent liquor stores, distributors, and craft producers.” When one member and active participant of this symbiotic local business ecosystem thrives, everyone thrives.

Because Boulderites have so many diverse and one-of-a-kind products to choose from on a daily basis, Boulder’s taste in beer, wine, and spirits is unique in and of itself, and local independent retailers are tuned in.

“Boulder loves unique, small batch, hand-crafted products that tell a story about how they came to be,” says Cardene Otsuka, Co-General Manager of Liquor Mart in Boulder. “We have the ability to react quickly and decisively to what our customer really wants.”

Being immersed in the mecca of craft beer that is Colorado means staying ahead of the game, not solely following national or overarching trends. Local retailers can instead keep a pulse on what the community here in Boulder, the very community trailblazing many of these unique trends, is thirsty for. At independently owned liquor stores Boulderites can be sure they’ll find not only their favorite seasonal, special release, rare, local craft beer, but also be presented with new and exciting options dictated by the expertise of fellow locals, not a large corporation.

“Boulder is the ideal audience for locally produced food, beer, and wine. We love to know who grew it, who made it, and how they did it,” says Otsuka. Boulderites are proud both of what they produce and the local citizens who produce it. According to Otsuka, craft breweries that have boomed in recent years, such as Avery Brewing Company and Boulder Beer Company, began distributing and grew their loyal followings in the coolers of independent liquor stores like Liquor Mart, giving locals the opportunity to support those at the forefront of the craft industry through easy access and wealth in variety.

“Access to market is vital to a start-up brewer,” says John Carlson, Executive Director of the Colorado Brewers Guild. Without opportunities to test out and sell their products and to also tell their unique stories, small craft producers and independent local businesses would suffer.

Keep Colorado Local’s goal is to keep this thriving local ecosystem alive and well by ensuring local businesses can compete alongside and against national chains. They oppose changes in state laws that could allow out-of-state corporations and chain stores to have more free reign to sell full strength beer, wine, and liquor in the state. According to Dierking, an introduction of chain liquor stores into the area would mean that an estimated half of local liquor stores would go out of business within mere years, as larger chains would be able to sell products for lower prices. However, this reduction in cost would ultimately benefit corporate producers, not Boulder and Colorado’s craft innovators, not just putting a damper on the local craft ecosystem but essentially destroying it.

Ask local craft enthusiasts their opinion on what bringing these corporations into Boulder would mean and the responses have a similar theme and thread. Dierking says it would “kill our unique ecosystem and the amazing craft culture we now have,” while Otsuka emphasizes it would trigger a change in our local fundamental values. Words like stale and stagnate are words often used to describe what could come of the local craft culture and ecosystem. Not only would this issue of identity be at stake, but it could also mean that underage access to alcohol could increase, as Colorado’s current liquor laws are very stringent, holding its state’s businesses to a high standard of safety and security.

According to Keep Colorado Local, Colorado is home to over 70 craft distilleries, over 130 wineries, over 300 craft breweries, and over 1,600 liquor stores. Help to keep the innovative spirit of Colorado and Boulder’s craft industries thriving, raise your glass, and say cheers to protecting our local businesses and identity.