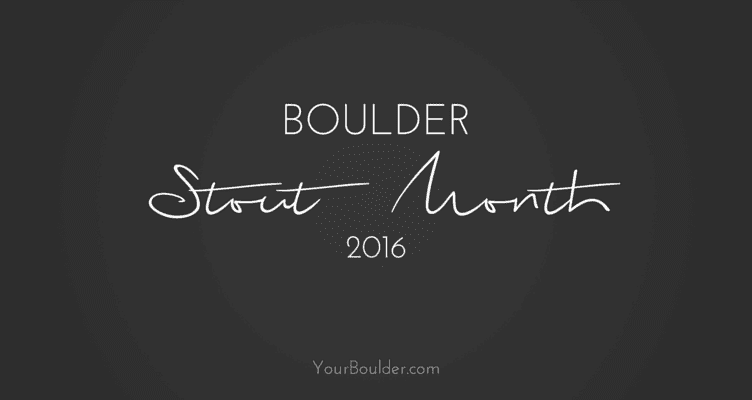 February kicks off Stout Month in the craft beer world. Nobody celebrates harder then the malt-lovin’ crew at Mountain Sun Pubs and Breweries—which isn’t much of a surprise—since the Colorado-based chain of brewpubs created the event years ago in an attempt to drum up some extra business during one of the slowest months in the beer year.

What began at the original downtown Boulder location with a few taps devoted to Stout beers throughout the month, has developed into a spectacle of a celebration complete with a cult-like following of craft beer drinkers that the count down the days until Stout Month, like kids countdown the days to Christmas. As Stout Month continues to flourish and grow, so do the dark and roasty offerings from local breweries that are in on the action. Check out these five Boulder breweries that are doing stout month right, and if you’re not generally a fan of darker, malty beers, now’s the time to give ‘em another try.

Twenty-Nine. That’s the magic number of Stouts being tapped at Mountain Sun Pub & Brewery this year. That’s one stout for every day in the month, and it’s clear that the Mountain Sun brewers had a lot of fun with brewing and naming them this year. The popular Girl Scout Stout returns—bringing back the well-loved mint chocolate and peppermint flavors and milk stout base to the tap list. The 48 Smooth Chai Milk Stout will also be available again. Ringing in at only 4.3% ABV, this stout was brewed using lactose, which creates a sweeter beer that balances out the blend of seven spices from the chai tea. Stop by on Valentine’s Day and snag a pint of the Planet Lovetron Imperial Milk Stout or a medium-bodied Cherry Vanilla Stout. Mountain Sun will also be tapping a pretty large variety of guest stouts throughout the month as well, from breweries all over Colorado including: City Star Brewing, Boulder Beer, Call to Arms Brewing, Great Divide, Telluride Brewing Co., Hogshead Brewery, The Yak & Yeti Restaurant & Brewpub, and more. Visit here for a full list of stouts on tap at Mountain Sun this month.

Avery goes big with the majority of their beers, and their stout offerings are no exception. With the huge growth in their barrel-aging program following the move into their new, current brewery, Avery is not only brewing up some big stouts, they’re packaging them, too. This year, be sure to try their recently released Vanilla Bean Stout. Part of the Botanicals & Barrels series, this bourbon barrel-aged stout is a double dose of vanilla rounded out with chocolate, caramel and molasses notes. Available in 22 oz. bottles or on draft. If you’re ready to get weird, order up glass of the Tweak—Avery’s seasonal bourbon barrel-aged coffee stout. Aptly named, this fan favorite tips the scale at a whopping 15% ABV and is also available in 12 oz. bottles or on draft.

Upslope offers a limited-release Oatmeal Stout during the winter each year, which is available on draft, and in 12 oz. cans in liquor stores. The full-bodied stout has hints of cocoa, fruit, and caramel, but like most of Upslope’s beers, is still drinkable and won’t knock you down at 5% ABV. Both Upslope taprooms will be releasing speciality stouts during the month of February, but be sure not to miss the tapping of Upslope’s Barrel-Aged Imperial Milk Stout, which will take place on February 4 from 5 to 9 p.m. at the brewery’s Lee Hill location. This limited release beer is rich and robust and spent seven months aging in a Leopold Brothers rye whiskey barrel.  Comida will also be serving up food for the night and 19.2 oz. cans of the beer will be available for purchase.

The Cinnilla Stout returns this month to the taps at Sanitas Brewing Co. and other various and restaurants and bars throughout the Boulder area. This spiced stout is a smooth, dark stout aged on organic cinnamon sticks and vanilla beans which creates a roasted, malty beer with hints of chocolates and dreams of drinking a snickerdoodle cookie. The beer is set to release the second week of February and will be available for a limited time only.

Sign up for our FREE weekly email with Boulder’s best events, concerts, happy hour deals, comedy shows and more. Delivered to your inbox every Friday!
PrevPreviousBoulder History: Daredevil Ivy Baldwin
NextThings to Do in Boulder When It’s Not Quite SpringNext