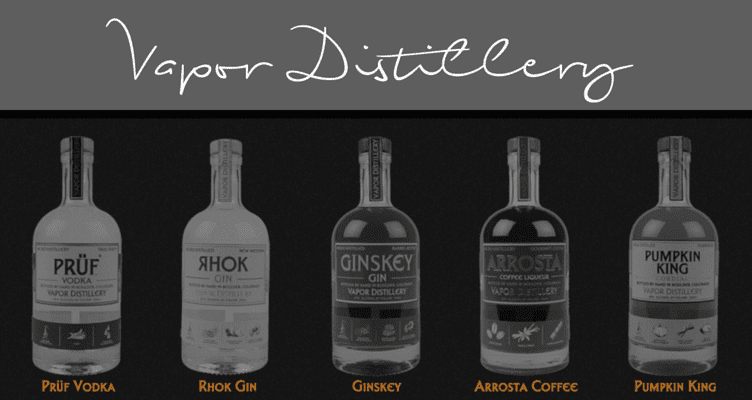 Just as craft beer brewers in Boulder are known for being extremely creative and innovative in their brewing, so are the distillers at Boulder’s craft spirit distilleries. At Vapor Distillery off Arapahoe and east of Foothills Parkway here in Boulder, extremely unique, one-of-a-kind local spirits are being created and made accessible to the public, helping the already booming craft spirit industry in the state continue to grow, experiment, and thrive.

Vapor Distillery began about seven years ago when co-owner Ted Palmer took his passion for quality gin and began distilling on a larger scale. A few years later Palmer met Alastair Brogan who had just moved to Colorado from Scotland with his family with dreams of creating an American Single Malt Whiskey. As Brogan would say, the two combined their passions for great gin and great whiskey into an overall goal of producing high quality spirits for the community. The two combined efforts and what was previously known as Roundhouse Spirits became the Vapor Distillery that exists today.

“Craft spirits are booming,” says Brogan, co-owner (and self-proclaimed Chieftain) of Vapor Distillery. “People want to know who makes their product, where the product is made, and how it is made.”

When Vapor first opened they were the sixth distillery in Colorado. Vapor was also the first legal distillery in Boulder County and is now one of three craft distilleries in Boulder and the largest in the city. What sets Vapor apart is their focus on extremely high quality products that are always pushing the envelope of creativity. Authentic in their use of local ingredients and Colorado Rocky Mountain water, Vapor takes pride in keeping their customers guessing, as they experiment with new recipes and cocktails in their bar, but always maintain their unique, high quality, small batch character.

Out of this philosophy have come internationally recognized and award-laden spirits. From their highly lauded and ever-popular Rhok Gin to their barrel-aged Ginskey, Vapor Distillery distributes their products throughout fourteen states in the U.S. and five countries internationally, including Italy, Hong Kong, and Germany. The craft spirit industry is continuing to grow step by step and is gaining recognition internationally, an effort that Brogan says Colorado is leading the way in.

In the future, Brogan says Vapor Distillery is looking to continue surprising their customers with new and innovative recipes and products. One such product, Vapor’s Pumpkin King, sells out every single year and is hugely popular. Made with fresh pumpkins from the local Munson Farms, the Pumpkin King has been lauded as being extremely unique and delicious and is one of the most creative products that the distillery has created so far.

Other plans for the future include producing the “Boulder Bourbon” for tentative release in 2018. Brogan is likewise striving towards creating an American Single Malt Whiskey to rival that of the world’s foremost standard in Single Malt Whiskey, Scotland. According to Brogan, it’s only in recent years that other countries worldwide have started being recognized for high quality Single Malt Whiskey, and he hopes to continue that tradition at Vapor Distillery.

While we’ll have to be patient for some of these new products being released in the coming years, Vapor Distillery currently has plenty of creative and enticing products available for Boulderites to enjoy and discover. Visit Vapor’s bar Tuesday through Friday from 4:00 – 9:00 PM, or on Saturdays and Sundays from 3:00 – 9:00 PM. You can also find Vapor Distillery products locally or go on one of their daily distillery tours (closed on Mondays) to learn about the process of distilling and Vapor’s unique, handmade local products. Cheers!