5 Olympians You Just Might See on Boulder Trails This Summer 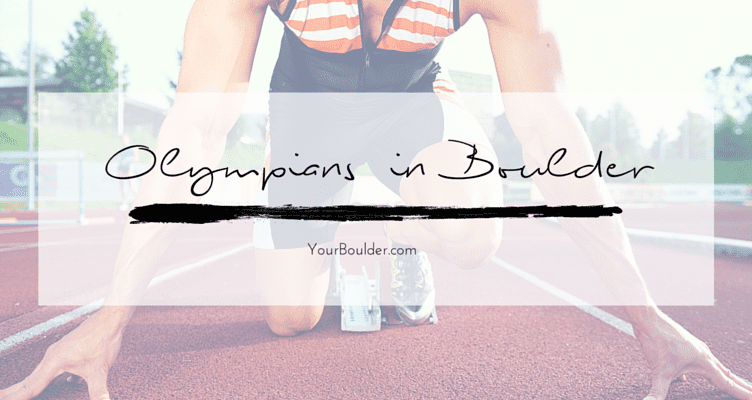 The 2016 Summer Olympics are set to take place on August 5-21 in Rio de Janeiro, Brazil, and if you spend any time on the trails around the city of Boulder, you just might see some familiar faces competing in your favorite events at this year’s games.

In the track and field category, three Boulderites, former CU star athletes, and members of the 2012 Olympic team, are busy training to make their final bids on the Road to Rio. On most days, you’ll find Emma Coburn (3,000 Meter Steeplechase), Jenny Simpson (1,500 Meters), and Shalaya Kipp (3,00 Meters) training together on trails in and around town, or even sharing a jar of mayo and other training and post-run tips on social media. At just twenty-one-years-old, Coburn, (born and raised in Crested Butte, Colorado), was the youngest runner on the American team at the 2012 Olympics — finishing ninth overall in the steeplechase final with a time of 9:23:54.

Simpson is a professional runner endorsed by New Balance, who’s first Olympic appearance dates back to 2008, at which time she was still a shining star for the University of Colorado. As a student at CU, Simpson broke and set NCAA records in six events.
Before becoming an Olympic runner, Kipp spent ten years as a competitive alpine ski racer, before trading sports and becoming one of the most celebrated track and field stars at CU. And although the three athletes and Olympic hopefuls are favored to compete in this year’s games, they’re not the only professional runners that call Boulder home.

The city of Boulder, Colorado officially began its journey to becoming one of the nation’s best towns for runners in 1970 — the year that Frank Shorter moved to town. Shorter, a marathon runner who moved to Boulder to train, would go on to win a gold medal at the 1972 Olympics in Munich. Today, Boulder is known as a runner’s mecca — attracting professional and amateur runners to the area with 300 days of sunshine, a mild climate, the high altitude, miles and miles of open space trails, and a community that drinks the Kool-Aid (organic and sugar-free, of course) when it comes to living the lifestyle that professional athletes adhere to. The restaurants in town are filled with healthy eating options and local restauranteurs and chefs are runners themselves. Like Zeal — Food for Enthusiasts, which is owned and operated by Iron Man triathlete, Wayde Jester. Even Bobby Stuckey, celebrated sommelier and founder of Pizzeria Locale and Frasca, spends his free time running on local trails.

But it’s not just Olympic track hopefuls that you’re likely to run into on local trails or grabbing some post-run fuel at Ozo Coffee Co. This year, two Boulderite’s will also be representing the city and the nation in that other sport that the people of Boulder love so much — cycling. Boulder native and resident, Mara Abbott, will represent Boulder as a member of Team USA’s Women’s Road Long Team. The thirty-year-old cyclist became the first American to win the Giro Donne race in 2010, and truly embraces the Boulder life, foregoing a vehicle as a main mode of transportation, opting instead to commute by bike. Another Boulder resident who will represent the city’s two-wheeled community in Rio this August is Erin Huck, who along with seven other women make up the Women’s Mountain Bike Long Team.

Sign up for our FREE weekly email with Boulder’s best events, concerts, happy hour deals, comedy shows and more. Delivered to your inbox every Friday!
PrevPreviousBoulder Hike of the Month: The Walker Ranch Loop
NextRise of the Republic: The Early DaysNext