A Holiday Retrospective: Can Boulder Do Better? 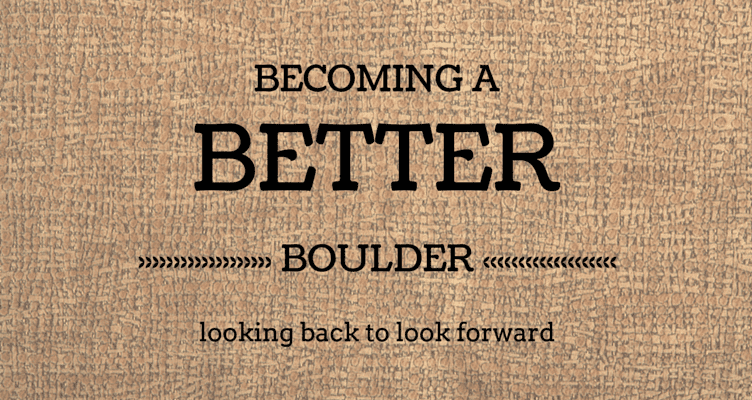 I stood in line at Boxcar yesterday, awaiting a hand-crafted cup of hot goodness, and I just thought wow.

And with all of the holiday running around, we’re sitting here enjoying a pretty damn swank 60-ish degrees. In December. And that, my friends, is pretty awesome.

So today, I wanted to write about looking back — because pretty soon, we’ll have no choice but to look forward. A new year, a new adventure. Whatever’s waiting on the other side will surely come whether we like it or not.

Which is why it’s a fine time to nod heads to what’s past.

We’re a nation up in arms and we’re not immune in our “Boulder Bubble.” With protests shutting down Highway 36 this week in the wake of the Eric Garner decision and on the heels of Ferguson, we’re reminded that we can do better. We have a beautiful community and we do a better than average bear job of taking care of one another. But what about beyond? Could we do better there?

We’ve noticed that news about hiking and the outdoors gets more play on Your Boulder’s Facebook page than stories that Boulder’s caught the eye of BBC for our housing affordability crisis or even candidate and legislation profiles for an upcoming election.

Are we voting not just for our community, but for the future of the country of which we’re but a small (but thriving) part?

If we don’t ask questions like this each year, where will Boulder be in 10 years (or 50) as a city? Our state bird is the orange cone as of late and it won’t do us any good to keep building infrastructure if the community as a whole doesn’t seek better. And I think we’re generally interested in better. But opening eyes wider — I’ve just never seen that it’s a bad idea.

We do well here. But can we do better? Could we trade less complaints about finding parking at Whole Foods and more tales of holiday meals donated to those in our community struggling? Maybe we could have one less conversation about gluten-free and one more conversation about the future of our schools. And just maybe we’re already doing that, aligning what we need with what our community needs.

But there’s always room to ask if we can do better.

And as we’ve had a year filled with rebuilding from the floods, celebrating neighbors coming together to bring our community together, and a hella year for tech and startups as we stay on the map for developing the future —

I’m pretty damn excited to see what “better” looks like.

Happy holidays, Boulder. May the season bring you and yours all you dream of and most importantly, all you need.

Sign up for our FREE weekly email with Boulder’s best events, concerts, happy hour deals, comedy shows and more. Delivered to your inbox every Friday!
PrevPreviousGive the Gift of Boulder
NextInside Avery Brewing: It’s All About the BeerNext