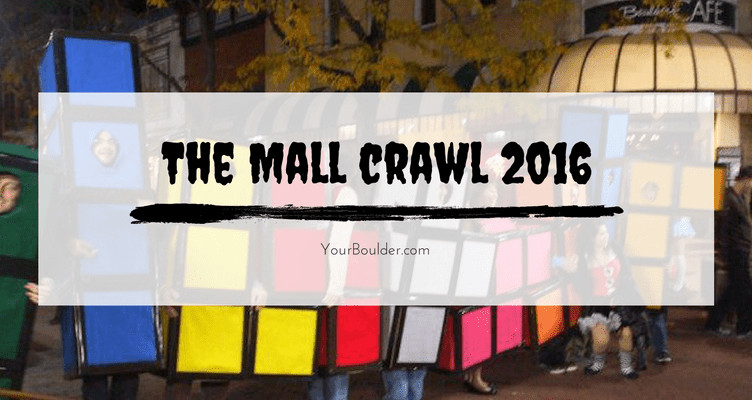 I told my essay-writing class on Boulder’s Front Range campus that I, too, had an essay to write. I told them what it was to be about. “Mall Crawl?” asked a student, astonished. “I’ve heard of a Bar Crawl, but what’s a Mall Crawl?”

This is what happened to the reputation of what used to be the biggest Halloween event in Boulder county and beyond, that became too big for its britches.

Back in the early 1980s, a bunch of Boulderites, old and young, thronged the Pearl Street Mall on Halloween night (or the Saturday closest to it) to drink a beer or two in the many bars along the mall, and to enjoy seeing and being seen in costume. Back then, it was safe enough even to bring your kids (I remember as a seven-year-old, getting jovial appreciation for my homemade blue satin clown suit), but by the time the ‘80s began rolling to a close, the event (which began as an unorganized, unofficial gathering) went from a throng of happy-go-lucky folk in costume to a teeming morass of tens of thousands of inebriated people, many of which weren’t even in costume.

The City of Boulder and its finest attempted some sort of sanity or control over what had become a massive bar fight and vandalism fest by calling it the “Boulder Boo,” but that failed dismally.Violence, broken windows and other vandalism, and most of all much over-use of alcohol became the norm down there (again, often not even a costumed party), until it was shut down by Boulder police in 1991. (I remember the talk amongst my friends at Boulder High in 1990 was: “If you want to get assaulted and NOT see any Halloween costumes, go to the Mall Crawl.”)

Streets leading to the Mall were blocked off, businesses told to close early, and even roads leading into Boulder from elsewhere were blockaded, only those Boulder residents with ID let into the city. Family-friendly events like the still-going-strong Munchkin Masquerade popped up, which allowed the idea of the Mall Crawl (many awesome costumes to see and treats to get from Pearl Street businesses) to flourish without all the damaged people and property. The Mall Crawl itself became a memory.

But then, in 2009, two young men named Jonathan Sackheim and Ryan Van Duzer decided to act upon their feelings of nostalgia for what the Mall Crawl used to be (before it got too crazy), and so they decided to carefully, quietly, make it happen again. They didn’t organize anything, nope–that’s not the spirit of the event. But they did create a Facebook page for it, and hoped folks would show up, and asked everybody to, you know, behave. Somewhat.

And their resurrection of the dead Mall Crawl was a success. To this day, the undead Mall Crawl is a big party. It is somewhat regulated as far as alcohol use, and it does tend to get rather huge. But in recent Crawls, costumes have abounded, vandalism has been at a bare minimum, and the imbibing has been, well, just what you’d expect when somebody throws a big party. Nothing scarier than that. And best of all, it’s still the grass-roots, informal, casual-fun type party you’d expect from Boulder. Well, except for the Thriller dance flashmob. Those guys are very controlled.