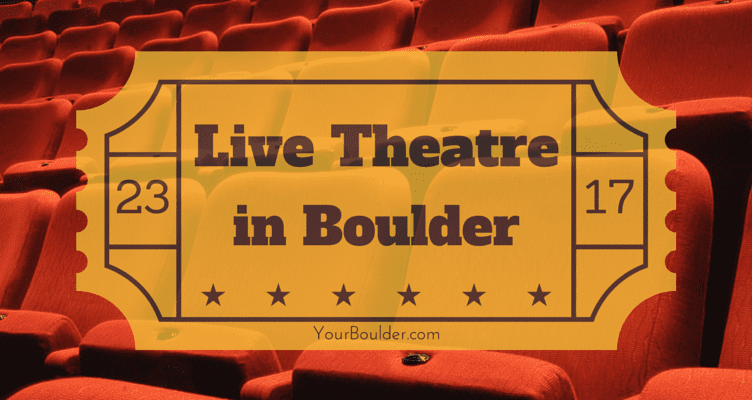 Boulder is an artsy town. Live music, visual arts, high powered artisans and craftspeople abound here, as does live theatre. There are a myriad of little local talented nodes of theatrical endeavors that call Boulder home, let alone two whole university departments’ worth of young talent as well. Highlighted here are three of the most noteworthy groups you should definitely go out and experience.

BETC has grown by leaps and bounds since its inception nearly a decade ago. It started as yet another smallish Boulder ensemble group and has now reached such heights that it can expand its production possibilities, hire more AEA actors, and pay all its talented (all local!) artists.

Artistic director Stephen Weitz describes the repertoire of BETC as one with “intellectual rigor” — shows that challenge as well as entertain Boulder audiences. Another aspect of this company’s “aesthetic niche” is the reliance on regional or world premiere plays and new works in general. BETC is multi-award-winning, and rightly so–the “thinking person’s theatre” of Boulder.

Their currently running show is an intellectual “drama/farce” called Hysteria, based loosely on an historical meeting between Sigmund Freud and Salvador Dali, and is a regional premiere (of course).

The BoTs are known for their innovation and their intense creativity, and rightly so: they have done everything from Shakespeare’s Midsummer in an actual forest (okay, a park. But still) to an ensemble-created dance theatre piece that tore down the Boulder Fringe Fest house called I Miss My MTV. The BoTs began as a posse of Naropa alums and called themselves Aluminous, because they didn’t want their magical theatrical creativity to end after school was done. And who can blame them?

Innovative and collaborative is how one of the “7-headed monster” that is the board/production core (yes, their Artistic Director is also an ensemble) describes the style of their repertoire. Both these aspects showed in spades in their September production of I Miss My MTV, which felt like a session sitting in front of MTV back in the ’80s or ’90s– not quite dance, not quite theatre, but having strong aspects of both, it was a combination of live music, straight gorgeous dance, sketch comedy, and documentary, all created by the ensemble in tandem with the director. This is the show that is making its return next on their roster (though not in Boulder this time). Also look for them to participate in the Boulder Fringe Fest tradition of the 5 Fifths. I hear this year it’s The Princess Bride!

It says something about the talent base of Boulder that we have two very skilled aerial dance theatres right here under our own Flatirons. FFP is the one who started it all, as they have been around for close to a quarter century. From traditional Boulder favorites such as Theatre of the Vampires to new innovations such as their recent partnership with Fiske Planetarium in their Star Sailors piece, FFP always has something interesting in the air to please any audience who enjoys aesthetic beauty combined with feats of derring-do.

Their professional track students have a show coming up in May, but other than that the soonest you can experience FFP in person is the 17th annual Aerial Dance Festival, which hosts artists of aerial arts of all kinds. What better way to enjoy their versatile, athletically gorgeous talents than to actually participate in a class? Don’t worry, there are plenty of courses in the August festival which start you at square one, and if you’re not up for trying it out yourself, there will be multifold performances to enjoy, both by the FFP-ers and by their guest artists.

And while we can’t mention everything and everyone under the sun in every roundup post we create, be sure to check out Colorado Shakespeare Festival, Boulder Dinner Theatre, Bolder Acts, and LOCAL Theatre Company to feed more of your theatre-loving soul.