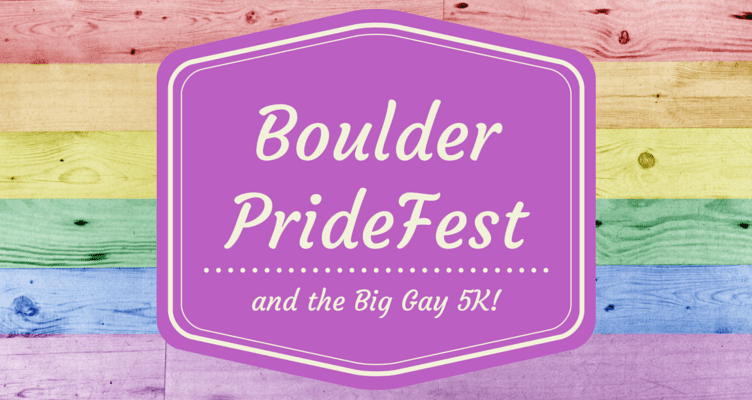 Beginning on Wednesday, September 9th, Boulder will kick off a week of pride; vibrant, celebratory, community-centered, reflective, and influential pride. Boulderites have been celebrating Pride Week during the month of September for decades. The 2015 week of events, organized by Out Boulder and supported by countless local and national sponsors and vendors, will feature talent showcases, movie screenings, a festival, and more, all while raising support, visibility, and awareness for the successes and the persisting struggles of the LGBTQ community.

Boulder will be a town painted rainbow beginning on September 9th and continuing on through Sunday, September 13th. Throughout the week, LGBTQ talent and history will be on full display at venues such as Shine on Pearl Street and the Boulder History Museum. From a happy hour and fundraiser put on by sponsor Twisted Pine Brewing Company, to a film screening of Transamerica and speaker event with writer and director Duncan Tucker, to a dance party at Apex Movement, the week will be full of enlightening and enriching exhibitions of art, expression, awareness, and history.

“What a year it’s been,” said Out Boulder’s Executive Director, Mardi Moore. “This is the culmination of a year well done. We’re celebrating who we are and what we’ve accomplished with gratitude to those who came before and with an eye towards what needs to be done in the future.”

Boulder Pride Week will culminate with the 12th Annual Boulder Pridefest on September 13th, a gigantic celebration of all things pride in Boulder’s Central Park.

“This is the most visible planned event we do,” Moore said.

With approximately 3,500 attendees in 2014 and an expected 4,000 participants this year, the event will include food trucks, local artists, a youth stage with an open mic, a family area, a health and wellness area, and more, and will focus on inclusivity and acceptance of all identities throughout. Local businesses have come out in full force to support the event, which will feature vendor booths galore and a huge heaping of unabashed pride.

Boulder’s Pride Week and Pridefest is put on by Out Boulder, and the various elements of this multi-day celebration embody all the things that Out Boulder stands for, strives for, and supports. Unfortunately the state of Colorado does not have the most positive history in supporting the LGBTQ community. Out Boulder initially began in response to a 1992 Colorado ballot issue (Amendment 2) supporting the banning of gay rights and making it legal to discriminate against homosexuality in the state. This ballot issue made it all the way to the United States Supreme Court before being overturned.

What started as an informal, collaborative group of various LGBTQ activists in the local area putting on Gay Pride events (then known as Boulder Pride) has expanded and grown immensely. Out Boulder has since opened a community center, provided resources and official programming to the community on a consistent basis, and become a constant positive presence in advocating for social justice in the community, intrinsically linked to acceptance and inclusivity in Boulder. Out Boulder is the only specific LGBTQ support organization in Boulder County.

Out Boulder puts on year-round programming focused on youth, partakes in consistent outreach to schools, spreading the word about the LGBTQ experience, and hosts extremely popular impromptu events at the Pride House, the organization’s headquarters and community center on 14th Street in Boulder, such as this past June, when Moore enthused that hundreds of people gathered to celebrate the Supreme Court’s ruling legalizing same-sex marriage.

There is also a large health and wellness element to Out Boulder’s year-round programming, which is why one of the most exciting new features of Boulder Pridefest this year is the inaugural Boulder Big Gay 5k on September 13th. Big Gay 5k races are run nationally and have been hosted in support of community centers in other Colorado cities such as Denver and Colorado Springs in the past, but this is the first year that the race will be coming to Boulder. Moore said that, when Out Boulder was approached about making a Big Gay 5k part of their annual Pridefest event, organizers thought it was a great idea, and they hope that this will draw even more health conscious and socially conscious Boulderites to participate in Pridefest. The race will also support the Boulder County AIDS Project, an organization offering services and resources to the community since 1985.

If you or someone you know and love is a part of the LGBTQ community (or if you just flat out want to support pride in your town!) please participate in what promises to be an amazing Boulder Pridefest on September 13th, as well as during the fun, educational, historically relevant events throughout the entirety of Pride Week.

You can find additional information about Boulder Pride Week, Pridefest, the Big Gay 5k – Boulder, and Out Boulder (along with other participating organizations,) by visiting their respective websites. You can also follow Out Boulder on Facebook, Twitter, Instagram, and their blog, to learn more about everything they offer to the community. Now get out there and celebrate with pride!