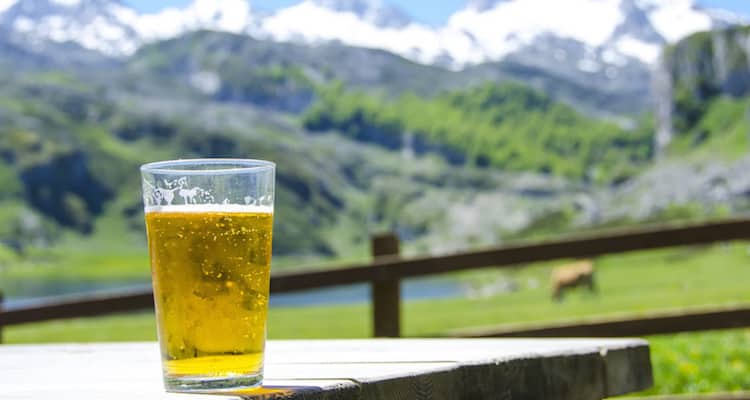 The warm weather is back in Boulder County, which means locals are trading out après drinks on the mountain for weekend afternoon bike rides to nearby tap rooms. Warm temps mean full brewery patios complete with cold beverages that typically land on the lighter side of the beer spectrum. It’s time for stouts and porters to get a much deserved rest, hibernating in shiny fermenters and oak barrels until the snow starts to fall once again. In the summer, anything goes when it comes to beer drinking, but brewers in the area have stepped up their seasonal beer list game, featuring light-bodied, low ABV beers along with barrel-aged sours and fruity wheat beers. Here’s a guide to limited release seasonal beers to add to your must-try list this spring/summer.

Tectum et Elix: Avery is welcoming warm weather by releasing four new barrel-aged beers throughout the spring months. First up, this sour ale aged in Cabernet Sauvignon barrels made with multiple Brett and Saccharomyces strains to give this beer some extra funk. Available now at the Avery tap room and select liquor stores. 5.5% ABV.

Insula multos Collibus: This one is a whopper, coming in at 9.7% ABV. This strong sour ale has been aging in fresh bourbon barrels for the past nine months and has also been fermented with cherries. The beer will be available at the Avery tap room starting on April 26th and will also be packaged in bottles and sent to select liquor stores in Colorado and beyond.

Fortuna: A citrusy sour beer aged in Suerte tequila barrels for nine months, finished off with fresh lime zest and Maldon salt. At 8.1% ABV, this is the perfect beer for the indecisive folks that can’t choose between having a beer or a margarita. This best-of-both-worlds brew will be available on tap at the Avery tap room on May 3rd, also making an appearance at select liquor stores shortly after.

Cold Hop British-Style Ale: A draft-only release, this beer is an ode to Charlie Papazian. It’s made with malts from Great Britain and a combination of Czech and New Zealand hops like Willamette, Saaz, Hallertau, Hercules, and Nelson Sauvin. Pairs nicely with the beautiful patio attached to the brewery. 6.3% ABV.

Kinda Blue Blueberry Wheat Beer: A personal favorite, the Kinda Blue is a fantastically refreshing beer for sipping on a hot day. Released annually in March/April, this beer can typically be found until the snow starts to fall. Find it locally on draft and bottled in six-packs at local liquor stores.  5.2% ABV.

Peach Wheat: Busted. Finkel & Garf’s Peach Wheat is technically served on tap year-round at the brewery, but this Gunbarrel location is still pretty new, and chances are you haven’t had a chance to sip on this great summertime beer. At 4.7%, this Peach Wheat is pretty perfect for sipping at the halfway point of your next bike ride…

Gubna Imperial IPA: Let’s be real. Tears are shed every year when the last of the Ten Fidy Imperial Stout (Oskar Blues’ winter seasonal) leaves the shelf, leaving a dark hole in the local beer industry. But a few years ago, this Longmont brewery came up with a summer seasonal to fill the empty void. The Gubna Imperial IPA weighs in at 100+ IBUs, giving hop heads something to drool over. The Gubna recipe changes each season to feature the best and most exciting hops from each year. At 10% ABV, this is a big beer, and can be found on draft at local drinkeries as well as in 4-packs at liquor stores just about everywhere.

Tickled Pink Saison/Farmhouse Ale: Saisons are synonymous with summer, which is why locals are really digging the Tickled Pink specialty brew from Oskar Blues. And not only is a crisp, refreshing beer for a hot summer day— it’s also tastes like raspberries. But in true Oskar Blues fashion, this light-bodied beer still rings in at 6.6% ABV.

Belgian-Style Pale Ale: Light and laced with coriander, this limited release is deceiving, tipping the ABV scale at 7.5%. This brew is available on tap at both of Upslope’s tap rooms and in cans at select liquor stores as well.

Thai Style White IPA: This beer is made up of citrusy and crisp flavors created by a combination of Belgian Wit yeast, plenty of hops, and Asian-inspired spices. Keep an eye out for this beer on tap at both Upslope tap rooms and in cans beginning at the end of the summer.

Gin Barrel Aged Treeline IPA: The Treeline IPA is an American-style India Pale Ale, dry-hopped with Centennial and Columbus hops and conditioned with juniper berries, making it a favorite of hop-lovers that frequent the Wildwoods taproom. But for a limited time, the folks at this east Boulder brewery are serving up a gin barrel-aged version of the beer, accentuating the juniper berry flavor and creating one tasty warm weather brew. Find it on tap at the Wildwoods tap room now.