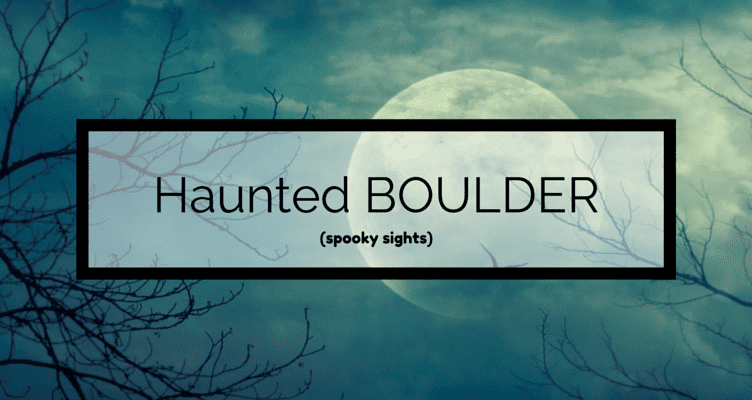 “Welcome to Boulder. Stay Awhile. Play Awhile. You’ll Like Boulder,” reads an old sign that used to welcome visitors arriving in the north side of the city, headed towards the downtown area many decades ago.

Over the years, it’s become a well known fact that Boulder is a vortex of sorts, capturing wandering souls from all over the globe and mesmerizing them into planting roots in one of the most popular cities along the Front Range. Once you’re in, Boulder is a hard place to leave, and that sentiment is never more prominent than during this time of year when haunting residents from the past are reintroduced, along with the historic buildings they just can’t seem to leave.

The city of Boulder was officially incorporated in 1871, following a boom of gold-seekers to the area. As the influx of people into the town grew, so did the demand for lodging, and in 1909, the Hotel Boulderado was born—introducing some swanky digs for those caught up in the local gold rush. Turns out, a lot of folks throughout Boulder’s history are big fans of the Hotel Boulderado, and some can still be found through the hotel today. Stories of a haunted elevator with interesting sense of humor, and a lady donning a flowing Victorian era-style gown, getting her rock on in chairs throughout this historic haunt, are still whispered among guests and staff members of the hotel.

The story of the ghost of Macky Auditorium on the University of Colorado campus is typical of most ghost stores—it’s a sad one. In 1966, a student at the University was lured into soundproof  room in Macky Auditorium, which would prove to be the last place the young student would ever been seen alive. It’s said that Room 304, the room the student’s body was found in, was covered with blood, and forever haunted by the ghost of the young victim. Throughout the years, several reports describe the sound of haunting organ music at all hours of the night coming from the wing of the auditorium in which the body was found.

Most people appreciate live music, but perhaps none more-so than George Palmer, a former manger of the Boulder Theater, who remains one of the theater’s most avid fans to this day. Legend has it that Palmer slipped while fixing a lighting rig in 1944—accidentally hanging himself inside of the theater. Today, George is one of the most famous attendees of all on-goings at the theater, inspiring the name of the Boulder Theater’s most recent next door neighbor, George’s Food and Drink, and often being seen in a sleek 1920’s suit hanging around the building. George is also suspected of removing many of the theater’s working light bulbs throughout the years.

Tom Horn,“Rocky Mountain Joe” Sturtevent, Mary Rippon, and Marietta Kinsgley, aka, “Lady of the Evening”, are just a few residents of the Columbia Cemetery that visitors are likely to encounter this time of year. Situated between ninth and Pleasant streets, this cemetery is said to be a virtual “who’s who” of early founders and pioneers of Boulder. Of all of the many historic gravestones that mark this important Boulder landmark, the most haunting might just be the gravestone of a Jane Doe that was buried in the cemetery circa 1954, as an unknown twenty year-old, who would be identified decades later by the Boulder County Sheriffs Office as Dorothy Gay Hoard from Phoenix, Arizona. With a history of unsolved murders, and legitimate  life-long residents of Boulder’s beginnings, it’s no surprise that this cemetery is deemed one of the most haunted places in town.

To learn more about Boulder’s ghostly past, catch a ride of one of Banjo Billy’s Ghost Tours, which take place Thursdays through Sundays during the haunting season.

Ghost adventurers can also hop on one of this year’s two historic GhostWalkGhostTalk tours of stately homes in Boulder’s oldest and vibrant neighborhoods. Tours will take place Saturday, October 24, and Sunday, October 25, from 5:30 p.m. to 9:00 p.m. Tickets can be purchased at historicboulder.org.