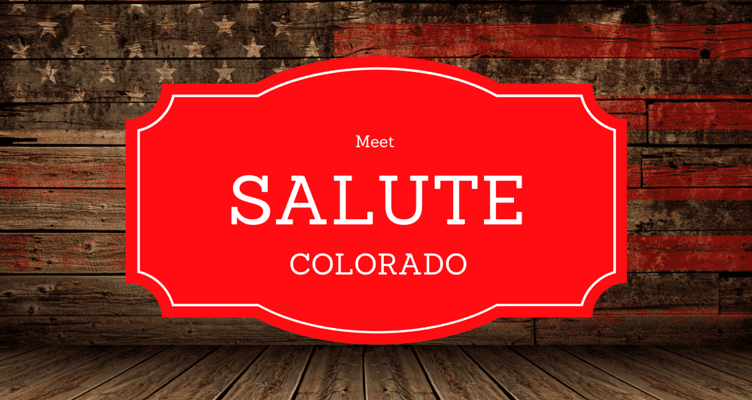 With over 15,000 veterans in Boulder County alone, and a strong veteran population and presence participating in degree programs at the University of Colorado Boulder, our area houses many such men and women going through this transition. Salute Colorado, a young non-profit organization started in late 2013, aims to assist Colorado veterans with this major change, working to support them on their paths towards success as a civilian here in our state and our city.

Salute Colorado Founder Lane Hornung is a Colorado native and a veteran of the United States Marine Corps. After serving in the Marines as a helicopter pilot, Hornung left the military and pursued a professional career in the realty and technology sectors, receiving his undergraduate degree from Stanford University and his M.B.A. from the University of Colorado Boulder. With prior experience working in mentorship programs for under resourced youth, Hornung wanted to give back to his community and, specifically, to the veteran community. With an emphasis on the value of personal, specialized, individual mentorship, Salute Colorado was formed to assist veterans as they go from being leaders in the armed forces to leaders professionally in the corporate world. Through networking, speaker events, and pointed meetings with an assigned mentor, Salute Colorado works to get veterans engrained into the Colorado and Boulder business communities.

“We focus on a small group of people and help them more deeply with personalized support,” says Heidi Phan-Peterson, Executive Director of Salute Colorado and Secretary & Treasurer on the Salute Colorado Board of Directors, of which Hornung is President.

The Salute Colorado program encompasses two years during which veteran participants, referred to as Associates, are paired up with a mentor who gives them personalized advice and access to a network of business professionals within their area of interest. While this leads to a very individualized experience for the Associates, the length of the program likewise ensures that all participants, both the mentees and the mentors, truly value mentorship. The program does not advertise a “quick fix” to becoming successful as a civilian business man or woman. Instead, the program facilitates a personal and meaningful mentoring relationship based on long term success. The program attracts mentor leaders who not only want to give back to their community, but also want to be personally involved in assisting our local veterans. Mentors, who can be either veterans or non-veterans, are devoted to working with their mentee to connect them with local professionals based on the career path that they are looking to pursue.

While Salute Colorado would be open to expanding into other regions within the state in the future, the program is currently heavily focused on the Boulder area which, in and of itself, serves as a setting ripe with resources and opportunities for veterans looking to pursue entrepreneurial careers.

“The entrepreneurial spirit is in our DNA because Lane himself is an entrepreneur,” says Phan-Peterson. “It’s a niche we are really comfortable with.”

According to Phan-Peterson, about half of the veterans in Salute Colorado’s program are either pursuing entrepreneurial career paths, or aspire to have their own businesses one day. The innovative entrepreneurial spirit in Boulder as well as the city’s population of people from all different backgrounds hailing from many parts of the country, makes the city an effective and opportunity-laden base for the program.

The first class of veterans to come through the Salute Colorado program began in the spring of 2014, and, according to Phan-Peterson, the hope is that the third round of the program will begin in January 2016. Accepting applications for the new class of Associates on a rolling basis, Phan-Peterson notes that Salute Colorado is concentrated on finding the right veterans who will commit to the program and get the most out of the abundant networking and mentorship opportunities it provides.

If you are a veteran in the area, or if you know a veteran who has recently transitioned out of the military and would benefit from Salute Colorado’s highly personalized mentorship program, the program application can be found on the Salute Colorado website here.

Each year, the Boulder Star on Flagstaff Mountain is lit beginning on November 11th, Veterans Day, to mark the beginning of the holiday season and, perhaps more importantly, the season of giving and thankfulness. There are countless ways to support both active duty troops and veterans year round and specifically around the holidays, such as supporting organizations like the Semper Fi Fund, Wounded Warrior Project, Team Rubicon, and Operation Homefront. You can also get involved with one of the dozens of programs coordinated through Soldiers’ Angels, such as joining the Letter Writing Team or the Angel Bakers Team. These are just some of the many opportunities that we have to help the past and present members of our nation’s military to have a happy, healthy, and joyous holiday season.