BIFF is Back: The Boulder International Film Festival from March 5th – 8th 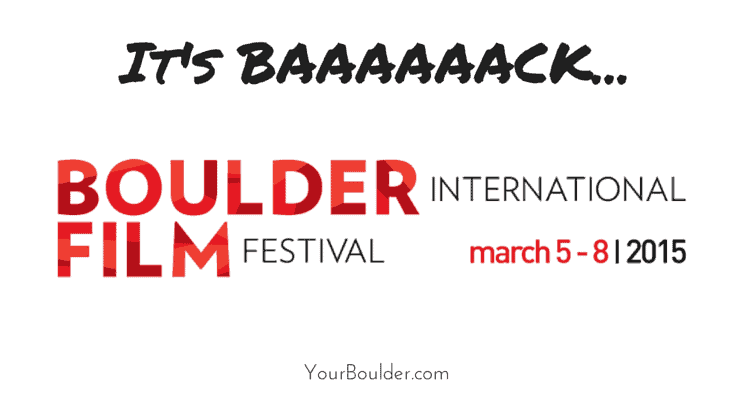 From Academy Award-nominated short films to intimate panels with passionate filmmakers and actors, and from swanky red carpet events to children’s programs to get the whole family involved in the cinematic discussion, BIFF brings together creative, curious, and forward-thinking minds, and the 2015 festival promises to be as multifaceted and diverse as ever. This year’s Boulder International Film Festival will run from today (March 5) though Sunday, March 8, and will include a plethora of special events, film screenings, and artistic showcases.

The festival opens tonight with two simultaneous red carpet events complete with live music and the best of Boulder’s food and drink, followed by a screening of The Wrecking Crew, a documentary detailing the career of this famous studio band. The festival will end on March 8th with the BIFF Awards Ceremony recognizing exemplary films from the festival, more live music, and a screening of Racing Extinction, a documentary on the potential for a mass wildlife extinction on Earth.

If this small sample of the festival’s variety isn’t quite stark enough for you, between these two dates, enjoy the vast plethora of subject matter and art that BIFF has to offer. On Friday, watch a Hungarian documentary exploring love and intimacy (Stream of Love), view an American film detailing a famous artist’s struggles and adaptions as he suffers from ALS (Imber’s Left Hand), or revel in the hilarity of the minds who gave America’s mainstream culture some of its most classic comedies (Drunk Stoned Brilliant Dead: The Story of the National Lampoon).

On Saturday, be part of a special advance screening of the Dreamworks Animation film Home, which will be officially released in theaters on March 27th, enjoy live music at The Lazy Dog as part of BIFF’s singer and songwriter showcase, or spend the evening at an event featuring the accomplished and acclaimed actor Alan Arkin of Little Miss Sunshine and Argo fame.

On Sunday, take an “Animation Station” or “Makeup for Zombies” workshop with the kids or partake in a viewing of Song of the Sea, a multinational animated film based on an Irish legend. Throughout it all, be sure to keep track of what is being shown at the Youth Pavilion for less seasoned festival-goers and take part in post-film discussions at BIFF’s TalkBack Café on Pearl Street. From interactive filmmaker panels to short documentaries, and from a University of Colorado student film competition and pitch slam to hard-hitting international films, the variety of material and experiences is endless and spans across multiple venues in Downtown Boulder, multiple subjects and modes of expression through the films being screened, and multiple countries of origin and focus. The full 2015 BIFF Program Events is likewise available online.

One of the new features of BIFF this year that will be highlighting the talent and culture of its unique host city, Boulder, is the CineCHEF event that will take place on Friday, March 6th. Renowned and famous local Boulder chefs will take part in a competition not only testing their culinary skills, but also their film savvy and creativity. Chefs will be challenged to pick a movie theme of their choice and to then create and serve dishes based on that film-inspired theme with attendees voting on their favorite concoctions at the end of the event.

While many of the events associated with BIFF are free to the public, tickets for individual film programs and events are available to be purchased online, by phone, or in person at the Boulder Theater Box Office. Tickets are available for advanced sale or on the day of an event, and multi-event film passes, such as the BIFF Festival Pass, are available as well.

Throughout the festival keep track of updates, exciting news, and chatter, by checking back on the Boulder International Film Festival website, or by following them on social media and tracking their hashtag #2015BIFF.

CU student ticket pricing discount code, BIFFBUFF15.  This code can be used for all BIFF films, excluding the shorts.