How Boulder County Craft Breweries Give Back: A Charitable Journey 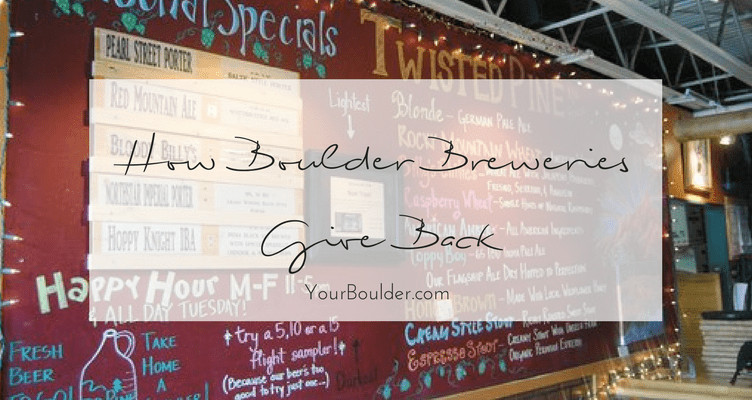 Boulder County craft breweries don’t just make up a large part of the area’s identity and culture. They are also huge proponents of their local communities, from supporting local musicians and artists through countless live music events to contracting with local food trucks, often using local ingredients in their food menus, and partnering with local small businesses on events.

These same craft breweries also give back to their communities and neighbors in need by working with local non-profit and charity organizations to do good works with their brews. Some of Boulder County’s “original” craft breweries, including Avery Brewing Company and Left Hand Brewing Company, played a large part early on in the craft beer scene by establishing a tradition of being extremely involved in the community. It’s a tradition that has continued to grow into today, as a huge number of Boulder County breweries consistently and creatively work with non-profits to support the community and those in need within it.

“We believe that non-profits benefit the local community in very significant ways,” says Jean Ditslear, owner of 300 Suns Brewing Company in Longmont. “Whatever we can do to keep them able to do their jobs more easily benefits all of us here in Boulder County. Our philosophy is to give as much as we can to the community that gives us our home.”

From recurring taproom events to festivals, fundraisers, and more, here are just a few of the unique ways that Boulder County craft breweries support the community.

Leveraging an amazing product and putting it to good use within the community is a practice that longtime Boulderite Michael Memsic, co-founder and CEO of Sanitas Brewing Company, adheres to.

“From the brewery’s conception, I knew that giving back to the local community was wildly important to me,” says Memsic.

From partnering with Downtown Boulder at beer festivals that benefit the preservation of the Pearl Street Mall area to hosting events in their taproom in support of local foundations, Sanitas uses their beer to highlight local charities in a way that, according to Memsic, is often far more effective than cash contributions. Memsic notes that there are over 250 charities Sanitas has worked with, including strong partnerships with Attention Homes, which supports homeless youth, and Realities for Children, which focuses on children who have grown up in the foster care system. On any given week Sanitas is involved in upwards of four or five events directly benefiting local non-profit organizations.

Longtime local brewery Twisted Pine Brewing Company has been active in the Boulder community since its creation over two decades ago.

“We mainly look for organizations working to make Colorado a better place,” says Amy Russell, Director of Possibilities at Twisted Pine. “We’re honored to host and connect our customers with non-profits doing great work in the community.”

Utilizing craft beer’s ability to bring people together, Twisted Pine holds at least one Pints with a Purpose event each month, hosting a local non-profit in their taproom and donating $1 from every pint sold that day to the organization. By often bringing live music or trivia activities into these events, Twisted Pine creates a fun and engaging atmosphere where their patrons can learn about local charities and how they can get involved.

“People come together over pints of beer,” says Henry Wood, Director of Sales and Marketing at Upslope Brewing Company. “Being civically minded is a common theme in our industry.”

Owned by longtime proponents of supporting Boulder’s community, Upslope partners with local non-profits both inside and outside their taprooms. On the first Wednesday of each month during Upslope’s Pints for the People events, a non-profit is selected to receive $1 of every pint sold that day. These organizations often align with Upslope’s value on environmental stewardship and a love of the outdoors, and have included Colorado Public Radio, High Fives, Trout Unlimited, Big City Mountaineers, Colorado Pet Pantry, Colorado Mountain Club, and many more. The 4th Annual Upslope Get Down music festival coming up on May 20th will also benefit Protect Our Winters, who will receive a percentage of beer sales from the event.

Upslope also works with organizations in the field. One example is their recent partnership with Wildland Restoration, an organization that plants willows in Eldorado Canyon and Four Mile Canyon to stabilize ground that was affected by the Boulder floods in September 2013.

“It was always a no brainer for our company to work with causes that we believe in,” says Laura Greaney, Event Coordinator at Upslope. “We have a responsibility to cultivate a healthy environment for ourselves and our neighbors to thrive in.”

Boulder mainstay Walnut Brewery is no stranger to supporting local non-profits. On the second Thursday of each month, Walnut hosts a tapping of a new beer and, for the duration of the month, a portion of its profits go towards a select local organization. Just this month, the Fire Chief Ale was tapped on March 9th in support of the Children’s Hospital of Colorado Burn Camps Program, and additional organizations they’ve supported include the Rocky Mountain Rescue Group and the Spectrum Foundation of Colorado.

Walnut’s next tapping is on April 13th at 6:00 PM and will benefit the Dawg Nation Hockey Foundation, which supports families in the Colorado hockey community.

In the northeast corner of Boulder County, Longmont is a tight knit community in and of itself, and 300 Suns Brewing Company owner Jean Ditslear believes a strong community is vital to helping all its local small businesses thrive. Small business owners in Longmont for 17 years, Jean and her husband, 300 Suns co-owner Dan, feel it’s a combination of their creativity and a scrappy attitude that positions 300 Suns to be able to bring awareness to Longmont’s local non-profits.

As part of their 65 Days of Making it Rain for non-profits each Wednesday, 10% of sales at the 300 Suns taproom that day are given to charity. 300 Suns also hosts a wide variety of events throughout the year for charities, including their annual Chili Cook-Off and Beer & Spirits tasting event in September and two Olympics-themed events, the Hoplympics and Cabin Fever Games.

300 Suns is also always looking for new ways to benefit the community, and they recently collaborated with the Boulder County Bombers roller derby team to create and sell the Knock ‘Em Down Brown Ale.

In total over this past year, 300 Suns has raised over $10,000 for non-profits such as the Longmont Humane Society, Arts Longmont, ArtWalk, Out Boulder County, First Nations Development Institute, Safe Shelter of St. Vrain Valley, A Woman’s Work, Habitat for Humanity (through the House that Beer Built project), and many more.

According to Brett “Smitty” Smith, Chef and Partner at The Post Brewing Company, Lafayette is a community that benefits from a network of local chefs and brewers that not only support each other’s businesses, but their charitable endeavors as well.

“Craft breweries are community gathering places where folks have fun, see family, and meet friends new and old,” says Smith. “It’s only natural that we would rally to support each other and those in need.”

The Post Brewing Company focuses on a spectrum of charitable works, from supporting large organizations to individuals in the community who have been diagnosed with health issues. From supporting the Autism Society of Boulder County through their annual Jack’s Benevolent Bash to plans to work with the Lafayette Professional Firefighters and Veterans to Farmers program on their Townie Fest this year, The Post is dedicated to supporting its neighbors.

Sarah Ingraham, The Post’s General Manager, says The Post and the community have a symbiotic relationship in which they truly support one another. From participating in neighborhood clean-ups to supporting multiple local schools and the Lafayette Chamber of Commerce, The Post is the quintessential neighbor who will be there for you however they can.

To follow any of these breweries’ leads and get involved, check out the links within this article.

These are just a few examples of how Boulder County craft breweries support the community, and it is not a comprehensive list. Tell us how your favorite brewery is working towards a better Boulder in the comments below!