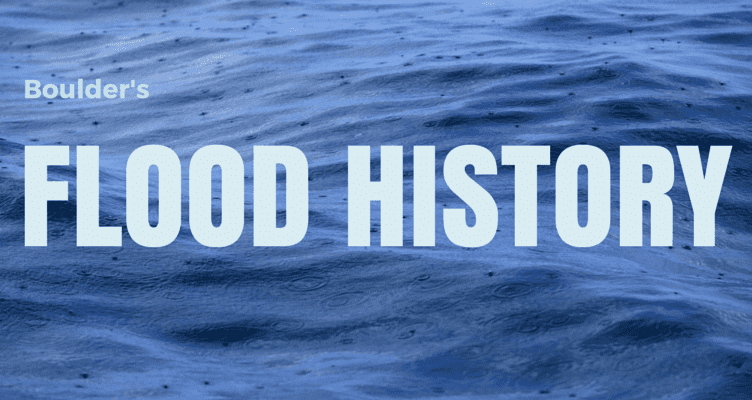 Alongside the Boulder Creek Path in Boulder’s Central Park, the Gilbert F. White Flood Marker stands as a stark pillar of awareness of Boulder’s susceptibility to large-scale flooding. The turquoise marker, located just east of Broadway between Arapahoe and Canyon, denotes benchmarks of what the water levels of 50-year, 100-year, and 500-year floods would look like, as well as the water level that was reached during the Big Thompson Canyon flood of 1976.

Viewing the marker while looking westward at Boulder Creek as it flows beneath Broadway, one cannot help but imagine the sheer amount of water that each of these natural disasters would have entailed and how that monumental force would have impacted the very ground you’re standing on. The potential for flooding is a part of Boulder’s reality, but having knowledge about historical instances of flooding in Boulder increases awareness and ultimately preparedness for the next time this occurs in the area.

There are various geographical reasons that Boulder, and Colorado in general, are susceptible to both flash floods (very rapid, sudden, and intense rises of water level in a creek or river, usually caused by extreme weather or the breaking of a dam) and river floods, which are more predictable. The Front Range is likewise susceptible to wildfires and drought, occurrences that change the make-up of the ground and soil when they happen, causing there to be less vegetation to absorb potential flood waters and ground that is harder and doesn’t allow water to seep into it as easily.

Boulder’s terrain and the mountains to the west of it also make it prime for flooding with steep, stark, and sudden changes in elevation, creating canyons, slopes, gullies, and plains, that water could quickly flow down off of and into. All of these factors, combined with Boulder’s propensity for sudden bursts of isolated storms, make the area a prime flood location.

Gilbert F. White, for whom the flood marker memorial in Boulder’s Central Park is named, was a renowned geographer and was known as the “father of floodplain management.” Having been a Professor of Geography at the University of Colorado for over twenty years, White did particular work on the science behind and preparedness for flooding in Boulder.

The memorial in Central Park serves as an educational tool for Boulderites for the hazards associated with flooding. The noted heights on the marker (50-year, 100-year, and 500-year flood levels) correspond to the annual estimated probability of a flood of that magnitude occurring. The marker is also flanked by educational information boards further explaining some of White’s philosophies about building for flood survivability and flood safety.

The first major flood reported in Boulder was the “Great Flood” of 1894. Known today as a 100-year flood, at the time this was the largest flood that the city of Boulder had seen. What is now known as Canyon Boulevard was left under feet of water in late May of 1894 as a persistent torrent of rain added to an unusually large snow melt from the previous winter, causing Boulder Creek to rage into town from the westward canyon. While the Pearl Street and Mapleton areas were largely spared, bridges collapsed, train yards were flooded, and Boulder was essentially cut off from the outside world for multiple days.

According to Silvia Pettem’s book, Boulder: A Sense of Time & Place Revisited, ever ingenious (and ever thirsty) Boulderites adapted and invented new ways to temporarily get about town, constructing foot bridges to get from one place to the next and pulley systems to transport kegs of beer from what was then the Crystal Springs Brewery near the intersection of Arapahoe and Ninth Avenues to customers in downtown Boulder.

The Boulder area experienced significant floods in the twentieth and twenty-first centuries as well. July of 1906 saw the flash flooding of Pearl Street, and late August of 1938 saw the flooding of Boulder Creek, St. Vrain Creek, and South Boulder Creek, which hit record levels. In early May of 1969, Bear Creek (near Table Mesa) flooded to a 50-year level, while Boulder Creek and South Boulder Creek likewise swelled and cut off many mountain towns to the Boulder area as roads were cut by the fast-flowing water. In July of 1976 the Big Thompson Canyon flood occurred, a devastating flash flood north of Boulder that demonstrated how sudden flash flooding could be.

Boulder’s most recent major flood in September of 2013 is one that Boulderites and others in Boulder County are still facing repercussions from today. The result of an unprecedented, record-breaking 1,000-year rainfall, this 100-year flood wiped out homes, businesses, roads, and more, left many mountain towns cut off and isolated, and prompted major disaster declarations, emergency declarations, a FEMA response, responses from outside disaster response and recovery organizations such as Team Rubicon, and, ultimately, sky-high costs of damages.

Each of Boulder’s flood experiences has provided opportunities for the city and individuals to learn from after the fact so that it can endure more efficiently and continue to be resilient in the future. Having knowledge of flood safety in Boulder is key, and there are plenty of resources available to Boulderites, both on large and small-scale levels, one how to prepare for potential floods and what to do to protect your property and yourself when flooding may occur.

The natural world and an appreciation for it is a large part of what Boulder values, even when that coincides with some of nature’s harsher elements. Continuing to learn and be aware of the science and historical significance of flooding will keep Boulder as a city as well as its individuals prepared to bounce back from any flooding instances to come.