Catching Up With Tyler Grant of the Boulder-Based Band, The Grant Farm 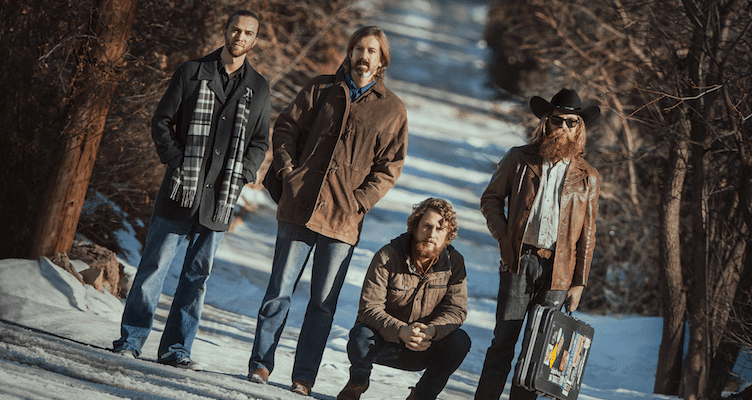 For decades, the Front Range of Colorado has been drawing musicians in like a harmonious magnet. We have drummers and guitarists, composers, and Grammy winners. With so many musicians making roots in the area, it’s only natural that many newly formed groups are short-lived.

But a few Boulder-grown bands have built great relationships with local venues and fans and have gone on to sell out venues like the Boulder Theater and the Fox Theater. Local band, The Grant Farm is one of those bands that have survived the five-year mark— steadily growing it’s fan base each year not only in their home-state of Colorado, but while touring around the country. Performing original tunes seeped in American Roots-Rock, founder and frontman, Tyler Grant, and his crew aren’t planning on hanging up their boots anytime soon. We caught up with Grant, a National Flatpicking Champ and guitarist/vocalist for The Grant Farm, to talk about the local music scene, check in on the Farm, and see what’s sprouting up next for this Boulder-based group.

Q: You’re originally from California. You spent some time in Nashville. You’ve travelled all over, but you planted roots in Boulder, Colorado. What brought you to the area?

A: During my time in Nashville, I took a lot of side-man gigs, and played a lot of festivals. I ended up playing Rocky Grass in 2004. The music scene in Colorado is the most happening scene that I have witnessed out of all of my travels as far as decent bands doing their thing and consistently having fans come out to support their music. There’s no place like Colorado. I lived in Nashville until 2009, but I was doing a lot of touring with the Emmitt-Nershi Band, and we started spending a lot of time and building a big fan base here in Colorado. I’m a west coast guy. I like the outdoors, and moving to Colorado had always been a bit of a fantasy for me. So in 2009, I made the move. I decided that instead of playing the Nashville game, I would rather go to Colorado and be an artist.

Q: You’ve toured with some impressive bands. You’ve done a lot of solo work. But your main project these days is The Grant Farm. How did that come about?

A: The original Grant Farm was a side-project filled with original tunes with just me and Andy Thorn, banjo player for the Emmitt-Nershi band. Andy ended up joining up with Leftover Salmon, but I knew that I really wanted to take The Grant Farm and run with it. I felt like there was so much bluegrass going on and I wanted to do something different. So I got back into playing electric guitar and started up a regular old roots-rock, kind of electric, group— thinking that the scene really needed that. The Grant Farm started full-time in 2010. Adrian [Engfer – bass/vocals], has been in the group for over four years. Our drummer, Sean [Macaulay] has been with us for two years, and our keyboard player, Kevin [McHugh], joined just last year. Since 2010, we’ve put out two albums, Grant Farm (2012), and Plowing Time (2014), along with an EP  released in 2014 called Meeting on the Mountain.

Q: The lyrics and music of The Grant Farm are very positive and upbeat. What’s the inspiration behind your tunes?

A: My mission is music to try to help the world. I feel like we’re all pretty fortunate to be able to play music as our profession. I feel the return of that gratitude is to try to help the world in some way. We’ve always done charity work, and we try to speak to that in our music. I feel like putting out a positive message right now is one of the best things that we can do to elevate society. Our mission statement as a band is to be the best band that we can be, and to elevate our audience with authentic music and a positive message.

Q: A long list of impressive “honorary farmers” have sat in with The Grant Farm during local shows. Boulder seems to have a very collaborative musical spirit. Why do you think it’s become home, and a home-away-from-home for so many musicians?

A: The mentality of nice-weather places with lots of sunshine isn’t typically conducive to artistic growth and a thriving artistic community, because everyone spends their free time outside. But in Colorado, somehow, everyone maintains an active lifestyle, yet they’re still involved in the arts and in music. I think that has a lot to do with the progressive festival scene here, starting with the Telluride Bluegrass Festival. A lot of acts came through that really made it fun and built up a following that really hasn’t been seen since the The Grateful Dead and Phish. That’s a universal thing with festivals all around the world. In Colorado, there is a very unique mix of musicians from different regions with different styles. I think the collaborative spirit of the festivals here has really spawned a lot of healthy, new music. Between the outdoor scene, the festivals, and the craft beer movement, we’ve really built a community here of people enjoying where they are.

Listen to The Grant Farm’s tunes for free here. Download them on iTunes. Check out their upcoming tour dates here.  And catch them on June 4th at the Fox Theater with fellow Colorado band, Great American Taxi.

Sign up for our FREE weekly email with Boulder’s best events, concerts, happy hour deals, comedy shows and more. Delivered to your inbox every Friday!
PrevPreviousFetch the Bow Wow Film Fest in Boulder This June!
NextA “Yoga Retreat at Home” for Even the Busiest of BeesNext