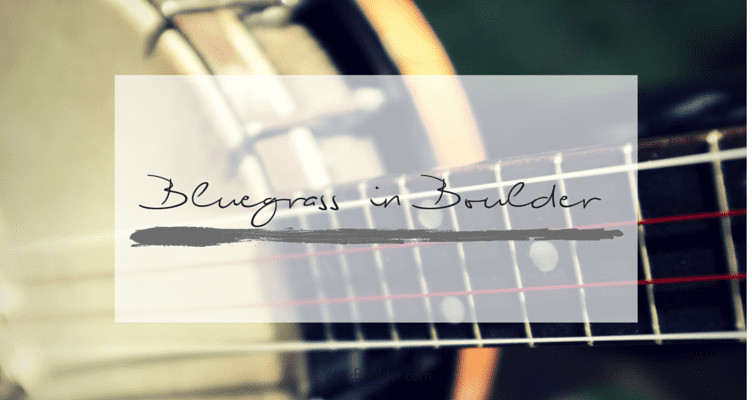 In August 2015, I was very excited to see my first bluegrass band since moving to Boulder when the Yonder Mountain String Band announced they would be playing a free show at Under the Sun Eatery and Taphouse off Table Mesa Drive the night before their August 21st concert at the Red Rocks Amphitheater. What I hadn’t anticipated were the wall-to-wall people packed into the taphouse two hours before the show and the line of eager bluegrass enthusiasts snaking back and forth throughout nearly the entire parking lot, just wanting to have a listen. I didn’t get to see Yonder Mountain String Band that night, but what I did see was the deeply rooted strength and passion of the bluegrass community and tradition here in Boulder.

Bluegrass music is a genre and practice that is at the same time both simple and complex. Most simply defined as music incorporating string instruments such as guitars, banjos, bass, fiddles, mandolins, some combination of all of these, and harmonized singing, bluegrass has origins and influences in Ireland, Scotland, England, jazz, and the farm country feel of the Appalachia region of the United States. Bluegrass can sound country, it can sound gospel, it can be energetic and fast-paced, it can be rhythmic and methodic, and it can sometimes be all of these things wrapped into one song.

Having gained mass popularity in the mid-twentieth century with the rise of Bill Monroe (who many consider to be the father of bluegrass) and the Blue Grass Boys, bluegrass is meant to be fluid, varied, and improvisational while also rooted in a common style and tradition.

“There is a specific language around how it is played,” says Mike Jackson of Boulder Bluegrass. “Everyone gets to take a turn leading a song and playing an instrumental break on other people’s songs.” It’s this “common language,” as Jackson calls it, that allows bluegrass to be at the same time wildly creative but also highly accessible.

Bluegrass music has been prevalent in Boulder since the 1960s and 1970s, when festivals that are major, longstanding affairs today, were first launched, and traveling bluegrass groups played gigs and brought their unique sounds to the state, the county, and the city. Through the years bluegrass only continued to grow its following in the area.

“In this area, bluegrass has a rich history and variety, and has had several decades to evolve,” says Pete Wernick, a.k.a. “Dr. Banjo” of Hot Rize, a hugely successful and influential bluegrass group that first performed on stage together in 1978 and were award-winning, highly decorated, Boulder-based artists throughout their twelve-year full-time run. Wernick, who has likewise taught bluegrass since the 1970s and served as the President of the International Bluegrass Music Association, says, “We have had a few generations of bluegrass musicians around here, and it shows.”

A hot bed of bluegrass tradition and experimentation, Boulder through the 1990s and 2000s became the stomping ground of groups such as the Yonder Mountain String Band, Leftover Salmon, and String Cheese Incident, who brought even more enthusiasm to the genre in the area. Ever-evolving but rooted in the teachings of local bluegrass greats such as Wernick, emphasizing being able to successfully and respectfully pick and play with others, Boulder’s bluegrass scene is sometimes called “progressive.” However, according to Wernick, Boulder County’s bluegrass is just as rooted in tradition as anywhere else.

The popularity of bluegrass also continued to grow because of the sense of community it fosters both between those who participate in the music and those who simply enjoy listening in. For those who play, jam sessions and open pick events are abound in the area where groups form and play with and off of each other, harmonizing, experimenting, and practicing in a total blend of voices, sounds, and styles. The local businesses that provide the opportunities for these jams to occur, such as the Mountain Sun Pubs & Breweries, give the public the chance to be exposed to and take part in this unique, creative community atmosphere as well.

“Bluegrass is not a fad here,” says Chris Dodge, Assistant General Manager and Live Music Talent Buyer at Longs Peak Pub & Taphouse, the newest of the Mountain Sun locations. Free community music, often in the form of bluegrass, has always been a priority of Mountain Sun since its original location opened in 1993. Dodge explains that many of the most successful bluegrass bands in the 1990s and 2000s, such as the Yonder Mountain String Band, “have played in the front window of the original Mountain Sun.” Through continued relationships with these bands, who have since gone on to become successful national acts, Mountain Sun locations continue to promote bluegrass by likewise supporting smaller local acts just starting out as well as community members just being introduced into the bluegrass scene.

The Longs Peak Pub & Taphouse in Longmont holds weekly Open Bluegrass Pick events on Wednesdays from 7:00 – 9:00 PM, where local artists and community members receive a free pint for participating. They also hold free music events on Saturday nights which are typically more focused on solo or duo acts and, according to Dodge, feature local bluegrass artists more than half the time.

Bluegrass music is a highly accessible and enjoyable genre with a wealth of history and community engagement in the area. From festivals to open jam sessions all over Boulder County any night of the week, Boulderites have the unique opportunity to listen to and participate in extremely high quality and immersive bluegrass music right here in town.

If you’d like to learn more about bluegrass events happening in the community, visit the Colorado Bluegrass Music Society or Boulder Bluegrass websites for event calendars. If you’re an artist looking for lessons in bluegrass, check out DrBanjo.com or some of the more intensive bluegrass academies in the area, such as the RockyGrass Academy. These resources promise to provide you with continuous education and awareness of the local bluegrass community so that you can become immersed in the enjoyment and the tradition of all that Boulder County’s bluegrass has to offer.