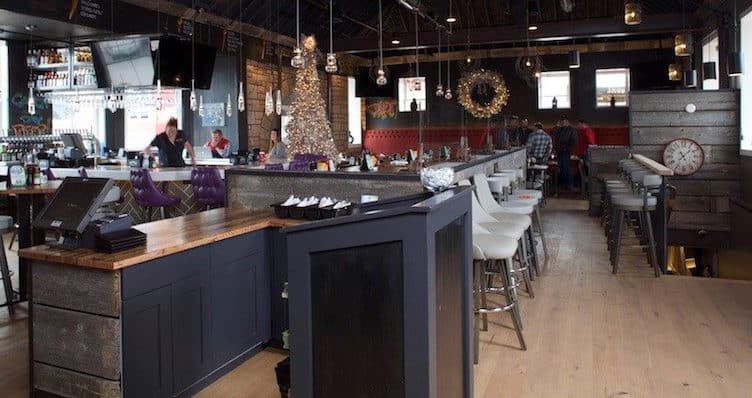 It’s been more than fifty years since the last train departed from the original Boulder Railroad Depot, but thanks to a Colorado-based restaurant company with Boulder roots, the hustle and bustle of a busy depot has once returned to the historic stone building.

It’s a story literally written on the walls of the Roadhouse Boulder Depot restaurant—the former train depot’s current inhabitant. It begins on 14th Street and Canyon Boulevard (then Water Street), where the Union Pacific Railroad began construction on the depot using locally-sourced stone from Boulder County quarries. The project cost a cool $16,000 and was the talk of the town by many Boulder residents who gushed over the building’s excellent stonework designed in the Richardsonian Romanesque style of architecture popular in the United States in the late 1800s.

The Boulder Railroad Depot would go on to serve as the city’s only depot until 1957, at which time it was out with the old and in with a new depot built just east of town. But instead of tearing the beautiful building down, it would continue on as a hub for transportation in the city, converting from a train depot to a bus terminal operated by the Denver-Boulder Bus Company. For sixteen years, the original train depot would operate as a revolving door for people departing from and entering the city of Boulder, until 1973, when the last travelers passed through the building, and the depot shuttered its doors.

Today, the train depot is the centerpiece of the city’s up-and-coming Boulder Junction neighborhood, a 160-acre redevelopment area that is home to a handful of contemporary affordable apartment complexes, a newly built Hyatt hotel, and fittingly—an underground RTD bus station. The building retains many elements of its historical past, but also sports a modern new look, thanks to the folks at the Roadhouse Hospitality Group—the company behind Colorado restaurants like the Wazee Lounge & Supper Club, Kickapoo Tavern, and several Dusty Boot restaurants.

Founded by three brothers and former University of Colorado Boulder alums, the old train depot now goes by the Roadhouse Boulder Depot, a name that reflects the tasteful combination of past and present that defines the building today. The walls of the restaurant are filled with black and white photographs depicting the depot’s journey through time. Steel panels and railroad tracks are subtly used as decorative touches in the dining room, community seating area, and bar of the restaurant, which officially celebrated its grand opening last week. An ode to the Boulder Jaycees (a chapter of the United States Junior Chamber) is painted on the wall above the restaurant’s open kitchen, paying homage to the organization credited with saving the depot from demolition in the early 1970s. With the help of the Historic Boulder, the Jaycees were able to orchestrate the relocation of the depot to it’s current address at 2366 Junction Pl.

On the menu at the Roadhouse Boulder Depot, diners will find a hearty selection of elevated pub fare featuring a blend of Southwestern, Asian, and All-American cuisines. Gluten-free diners can select menu items from a large section of the restaurant’s menu that is solely dedicated to gluten-free dishes. Locally produced craft beers, wines, and other spirits can be found on the drink menu, which can be sipped on the large outdoor patio which will open once the Boulder weather warms up.

Ready to head out? Check out their guide to getting there, including a handy embedded map. It’s an easy find, too. Just go past the Whole Foods Parking lot (yeah, you know it well) and keep heading east towards Foothills and bam. Bon appetit!

Sign up for our FREE weekly email with Boulder’s best events, concerts, happy hour deals, comedy shows and more. Delivered to your inbox every Friday!
PrevPreviousExplore Boulder in 2016: Sweet Local Tours
NextFrom Colorado to Hollywood: A History of Dalton TrumboNext